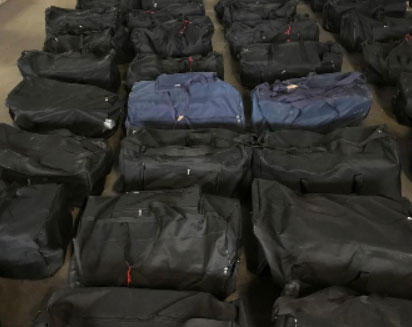 A record 1.8 tons of cocaine was seized from a warehouse in Lagos with a street value of $278.5 million, Nigeria's National Drug Law Enforcement Agency spokesman said on Monday, News.az reports citing Reuters.

The agency said the drugs, found in a residential estate's warehouse on Sunday, were destined for buyers in Europe and Asia.

West Africa is a major transit hub for cocaine made in Latin America and sold in Europe. In April, police in Ivory Coast seized more than two tons of cocaine, while authorities in the island archipelago of Cape Verde seized 9.5 tons of cocaine in 2019.

The U.N. Office on Drugs and Crime said that global cocaine seizures reached a record high of 1,424 tons in 2020.

The Nigerian agency arrested five people in connection with the raid who it said were members of an international drug ring that it had been tracking since 2018 in coordination with the U.S. Drug Enforcement Administration.

Those in custody included four Nigerians and one Jamaican national.