Railway linking Azerbaijan, Iran to be commissioned in March 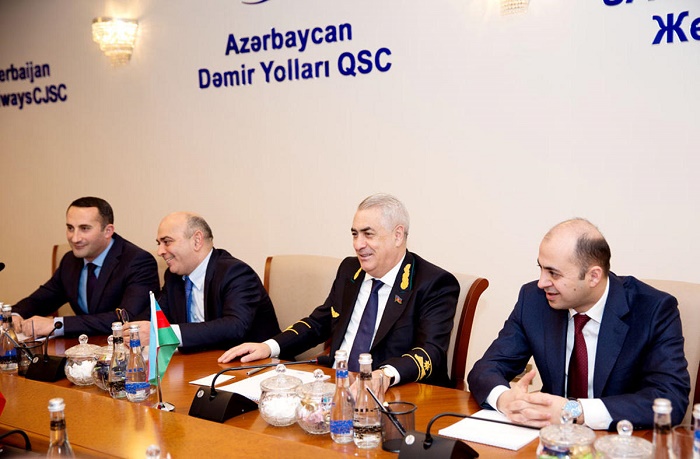 The Astara (Azerbaijan)-Astara (Iran) railway, which is being constructed as part of the International North-South Transport Corridor, will be commissioned in March 2017, Deputy Minister of Roads and Urban Development of Iran Saeed Mohammadzadeh said.

Mohammadzadeh, who is also president of the Islamic Republic of Iran Railways, made the remarks at a meeting with Javid Gurbanov, the head of Azerbaijan Railways (ADY), said ADY in a message Feb. 7, according to Azvision.az.

At the meeting, Gurbanov and Mohammadzadeh discussed construction of the Astara (Azerbaijan)-Astara (Iran) railway, development of the railway terminal in Iran’s Astara, as well as the work on the North-South project’s implementation.

Gurbanov pointed to the strengthening cooperation between the railway agencies of Azerbaijan and Iran and spoke about the projects implemented by the Azerbaijan Railways CJSC, the work carried out within the North-South corridor, and the operation of the Nakhchivan-Mashhad passenger train.

Mohammadzadeh, in turn, praised the launch of the Nakhchivan-Mashhad train and commissioning of an 8.3-kilometer railway section from Azerbaijan’s Astara up to the border with Iran as part of the North-South project.

The work, which includes the construction of a railway station and a terminal for transshipment of goods in Iran’s Astara, currently continues at a fast pace, Mohammadzadeh added.

The International North-South Transport Corridor is meant to connect Northern Europe with Southeast Asia. It will serve as a link connecting the railways of Azerbaijan, Iran and Russia.