Production of solar and wind energy in liberated lands can reach about 9,000-10,000 megawatts – Azerbaijani President 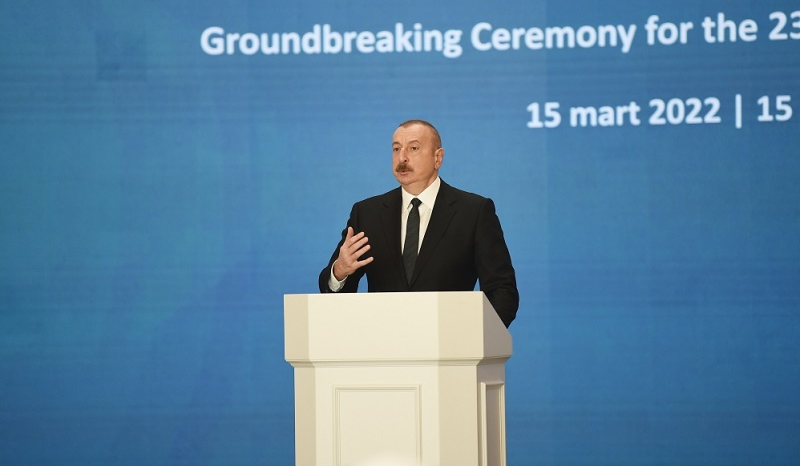 Great potential is available in the liberated Azerbaijani territories, accurate calculations have already been made and the production of solar and wind energy can reach about 9,000-10,000 megawatts, President Ilham Aliyev said on Tuesday.

The president made the remarks at a groundbreaking ceremony for the 230 MW Garadagh Solar Power Plant to be built in Azerbaijan by UAE’s Masdar company, News.Az reports.

The head of state noted that preliminary steps are already being taken, and negotiations are underway with bp to build a solar power plant with a generation capacity of more than 200 megawatts.

“I do hope that these talks are also successful,” he said, stressing that other large companies are interested in the region.

“I must say that during the 30 years of occupation, Armenians and the Armenian state destroyed the entire infrastructure, all the buildings, historical and religious sites in the occupied territories. There are many documents, video and photo information confirming this. In particular, more than 30 hydropower plants have been destroyed in Kalbajar and Lachin districts, and we have already begun large-scale work in the liberated lands, including in the field of electricity. Last year, we restored four hydropower plants. Their total generation capacity is 20 megawatts. This year, there are plans to reconstruct five hydropower plants with a combined generation capacity of 27 megawatts. Of course, these capacities are not very large compared to other stations. However, the number of these stations will be more than 30 in Kalbajar and Lachin districts alone, and these are hydropower plants. Of course, there is a greater potential for the creation of solar and wind power plants,” President Aliyev added.