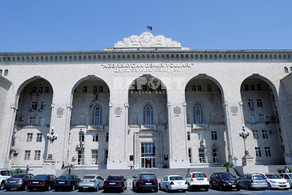 3 bulks of the building are four-storeyed, and one is five-storeyed.

On February 10, Azerbaijani President Ilham Aliyev and his spouse Mehriban Aliyeva got acquainted with conditions established at the administrative building of the "Azerbaijan Railways" Closed Joint Stock Company after reconstruction.

Report informs that Chairman of "Azerbaijan Railways" CJSC Javid Gurbanov informed the head of state and his spouse on work implemented here.

It was noted that the building was built in 1956 and consists of 505 rooms with total area of 29,000 square meters. 3 bulks of the building are four-storeyed, and one is five-storeyed.

A stand was established in the foyer, reflecting political activities of national leader Heydar Aliyev and President Ilham Aliyev as well as care and attention towards development of the country's railway.

It was noted that taking into account uninterrupted operation of the railway, two transformers and generator were installed in the building's courtyard, and two water reservoirs were built. The roof of the building, which is equipped with centralized air-conditioning system, is fully renewed.