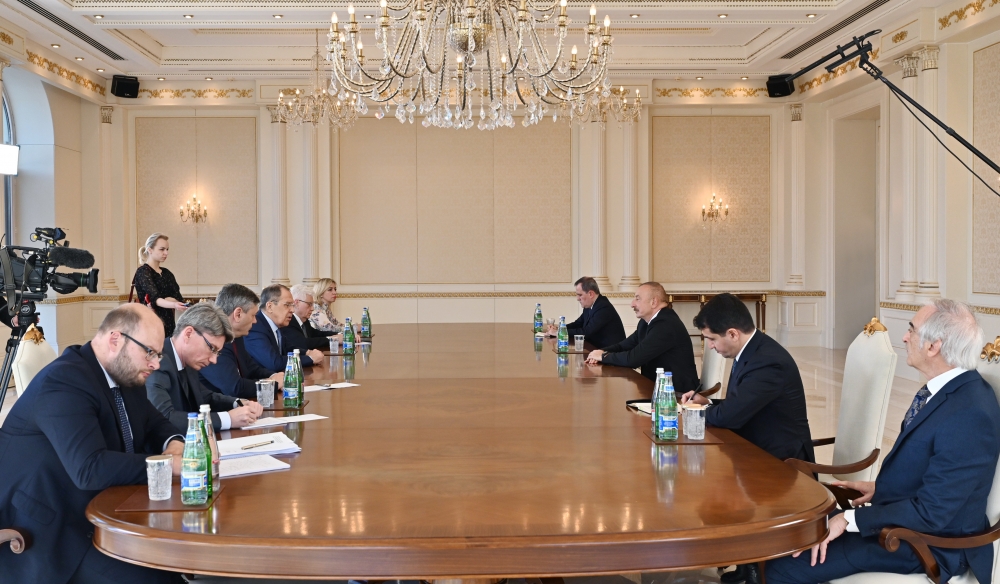 President of the Republic of Azerbaijan Ilham Aliyev has received Minister of Foreign Affairs of the Russian Federation Sergey Lavrov, News.az reports.

- Dear Sergey Viktorovich, I am very pleased to see you again. Welcome! On the eve of your visit, I remembered our previous meetings with both you and the President of the Russian Federation. The signing of the Declaration on Allied Interaction in Moscow earlier this year gave a good start to our relations, a new stage in our relations, such a positive harmony and dynamics. I believe that this key document for the future development of our relations is a wonderful result of long-term and very fruitful cooperation. A lot has already been done to implement provisions of the declaration. I am confident that new steps will be taken in this direction during your visit. It is noteworthy that in the 30th year of the establishment of diplomatic relations between our countries, we have summed up all the work done and identified further directions for the development of friendly and good-neighborly relations.

We can talk a lot about our relations. We have repeatedly exchanged views on this issue. I would like to reiterate my satisfaction with the development of political relations, permanent dialogue at the highest level, trade and economic relations, which have shown good dynamics this year, cooperation in the fields of transport, energy and, of course, the humanitarian sphere. In other words, it would be easier to list areas we do not have close interaction in. Of course, the Declaration on Allied Interaction is a very important step in our bilateral relations, and as I have already said, it will determine the development of our relations.

Today, of course, we will talk about the situation in the region, the post-conflict situation, the process of normalization of relations between Azerbaijan and Armenia. You are aware of our position. This position is aimed at establishing long-term peace in the region. I am confident that our efforts will be positively perceived by Armenia and many years of confrontation will end. Our proposal to start work on a peace agreement remains unanswered, but we still hope that this proposal will be accepted.

Among positive developments, I would like to point to the intensification of the work of the trilateral working group chaired by the Deputy Prime Ministers of Russia, Azerbaijan and Armenia. A new meeting was held in St. Petersburg recently. We do hope that tangible steps will be taken to implement the November 2020 Declaration in the context of opening communications, ensuring the unimpeded delivery of Azerbaijani cargo and citizens to the Nakhchivan Autonomous Republic. This is a legal obligation of the Armenian side. Unfortunately, more than a year and a half has passed since the end of the second Karabakh war, but this paragraph of the Declaration has not been implemented yet. I think that it will be possible to take many tangible steps within the framework of our concept to normalize the situation as a whole. Of course, we look forward to the active efforts of the Russian Federation to establish lasting peace in the Caucasus.

Welcome again. I wish you a pleasant time.

First of all, I would like to convey to you the most sincere greetings and best wishes on behalf of Vladimir Putin. He also highly appreciates the results of your visit and all aspects of our bilateral relations, our confidence-based talks on the regional and international agenda. Of course, the main outcome of the visit was the adopted document – the Declaration on Allied Interaction. In general, this document establishes a new quality of our relations, the positive experience gained over all previous years. We are determined to fulfill the instructions of the two Presidents to implement this Declaration, to implement it in sectors, and to implement other agreements at a practical level.

The intergovernmental commission at the level of deputy prime ministers is active. As you said, the turnover was at a record level last year – about $3.5 billion. This is not the limit, there are new plans at the level of both our governments and regions. More than 70 regions are involved in cooperation with Azerbaijan. I was told that delegations from Udmurtia, Bashkortostan, Perm and, of course, the Astrakhan region, which has special relations with Azerbaijan, visited your country this year alone.

In the 30th year of the establishment of diplomatic relations between our countries, a program of significant measures is being implemented. More than 20 different events are planned, some of which have already been organized, whilst the rest will be held before the end of the year. These events are well received by our citizens. This emphasizes the mutual aspiration of our peoples, the commonality of our cultures and historical memory. Of course, we appreciate the attention being paid to the Russian language in Azerbaijan, and you talked about that with President Putin.

As for regional issues, we are ready to do everything possible to facilitate the implementation of the three documents signed by the three leaders in November 2020, January and November 2021. According to our assessment, there is some progress in the activities of the tripartite working group on the opening of communications. We are discussing the issues to be agreed with the Armenian side. It seems to me that a general idea is being formed on how to solve the problem of organizing this work so that there are no artificial obstacles to the movement of cars with maximum comfort. Russia will help in this until the results are achieved. I do hope that this will happen soon. We are also ready to provide consulting services on the work of two commissions established for the delimitation and demarcation of borders in Azerbaijan and Armenia in accordance with other agreements. There are specific proposals on this. I would be glad to discuss them with you.

You mentioned the normalization of relations, the peace agreement and provisions of the future agreement submitted by you. By the way, we have heard that the Armenian side, Prime Minister Pashinyan, is ready to hold talks on this issue. We are ready to help here with the consent of Azerbaijan and Armenia. Of course, other international forums with the participation of Azerbaijan and Russia, such as the UN, the OSCE and the Caspian Five, all these places, as they say, already allow us the opportunity to develop the outlines of our interaction. Exactly a week later, the next summit of the Caspian Five will be held in Ashgabat. We are also actively preparing for it. My colleague and friend Jeyhun Aziz oglu and I discussed the results we could offer for the approval of the leaders.

Thank you again for the invitation and traditional hospitality. Thank you.

The head of state thanked for the greetings of Vladimir Putin and asked the minister to convey his greetings to President of the Russian Federation.