President Ilham Aliyev: We are on our own land. Lake Garagol and other places are ours 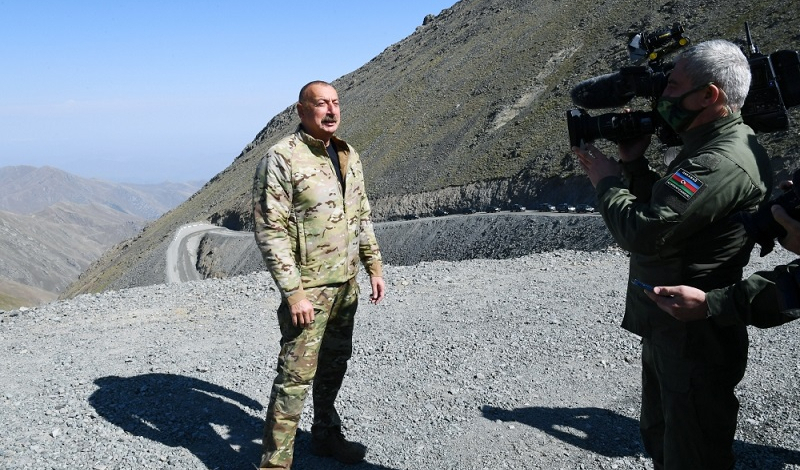 “We have started large-scale restoration work, including Kalbajar and Lachin districts and the East Zangazur region. Some of this work has already been completed – a substation has started operating. I have got acquainted with the construction of a hydroelectric power plant. A groundbreaking ceremony of an international airport has been held in Lachin. We have laid the foundation of two tunnels. Other infrastructure projects are underway. At the same time, as a pilot project, we have sent residents of Kalbajar and Lachin districts engaged in beekeeping and animal husbandry here, created conditions for them to start work, and this work has already begun,” said President of Azerbaijan Ilham Aliyev in his speech during the visit to Kalbajar district.

“At the same time, we are strengthening our state border in the direction of Kalbajar and Lachin. This border was in Armenian hands for about 30 years. After the snow melted in May, we approached these borders, took our positions, settled in Zangazur and reinforced our positions there. This is our land. The opinions expressed in Armenia are completely unfounded. We are on our own land. Lake Garagol and other places are ours. We are here now. This area was in the Armenian hands for 30 years. If that border crossed the place they are talking about, they should have taken it. They should have stood there and said that this is the border. But what happened? As soon as we arrived and stood here, they said no, we were standing in the wrong place. We stand in the right place, we stand where we need to stand, and we will stand wherever we consider necessary. Let no-one forget that,” the head of state noted.

“The entire border infrastructure and military units are being established by the Ministry of Defense and the Border Troops along the border – from Murovdagh all the way to the Araz River, and we are strengthening these borders,” President Ilham Aliyev emphasized.