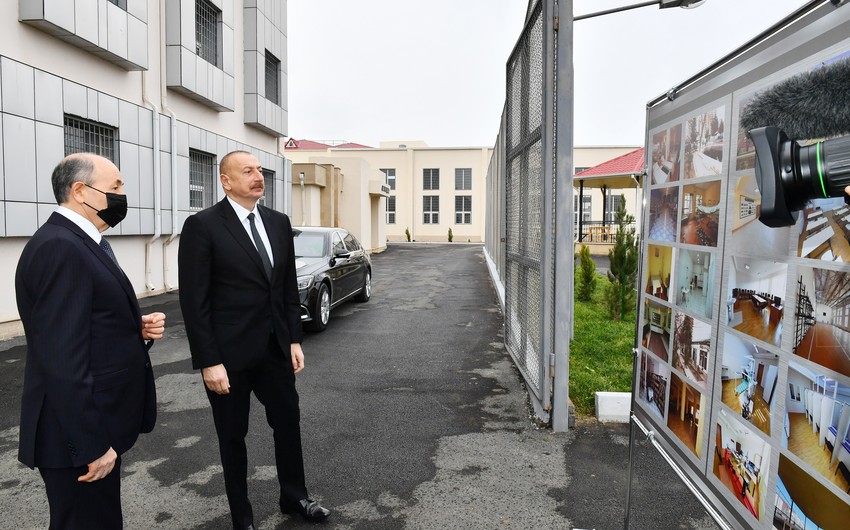 President of the Republic of Azerbaijan Ilham Aliyev has viewed the conditions created in the newly-built modern penitentiary institutions for women and juvenile prisoners, a vulnerable group in society, in Baku.

Necessary infrastructure has been created in both institutions for prisoners to spend their leisure time effectively, to do sports, engage in education and study various specialties. There is a library, a reading room and a computer room equipped with the necessary literature.

In accordance with the President's instructions to expand production areas and involve entrepreneurs and businessmen in this activity, prisoners will be engaged in weaving, carpet weaving, sewing and baking activities in the production unit established at the new enterprises.

A building for meetings with prisoners has also been constructed in the new penitentiary institution. There are separate rooms with all living conditions, a kitchen, walking areas for short-term and three-day meetings of prisoners with their families.

Apart from the classrooms, the two-storey school building built on the premises has labor, computer, other rooms and a gym. The conditions available here allow prisoners, especially minors, the opportunity to receive education and acquire vocational skills.

Thanks to the attention and care of President Ilham Aliyev, the construction of new penitentiary institutions for women and juvenile prisoners, who are regarded a vulnerable segment of society, is part of the drastic reforms carried out in the country. The modern conditions created here will serve to protect the rights of prisoners and pave the way for their effective rehabilitation and social adaptation.

Humanism is one of the key principles in the political course of the Azerbaijani state. About 6,000 prisoners have been pardoned by 35 decrees signed by President Ilham Aliyev so far, whereas four amnesty acts adopted on the initiative of First Vice-President and President of the Heydar Aliyev Foundation Mehriban Aliyeva have covered more than 40,000 people.

At the same time, as part of reforms to modernize the country's justice system, the penitentiary service is being improved, penitentiary policy is being humanized, and consistent measures are being taken to protect the rights of prisoners and improve the conditions of their detention, medical and other benefits.

The recently completed amnesty act signed on the occasion of Victory Day is another manifestation of the President's humanist policy. It has covered more than 15,000 people in total.