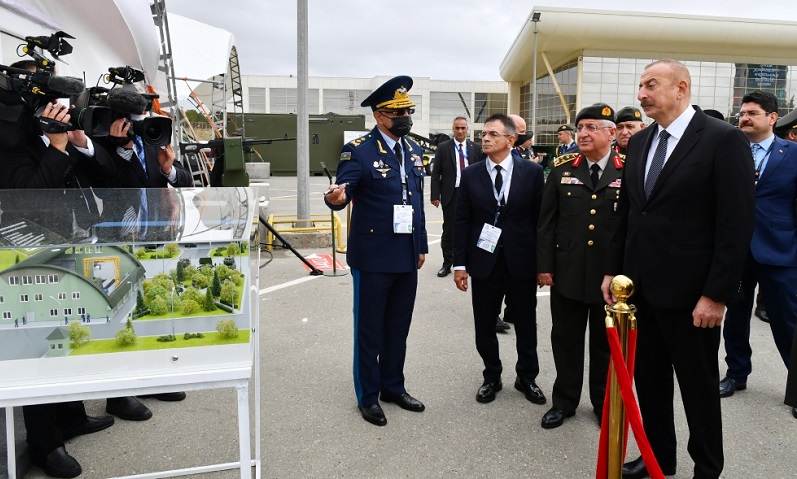 The head of state first viewed the stands in the indoor pavilions of the Baku Expo Centre.

More than 200 companies from around 30 countries of the world were involved in this year's exhibition. This large-scale event featuring modern weaponry and equipment is being held again after the break enforced by the pandemic. The exhibition is particularly important in that it has been organized for the first time after Azerbaijan’s glorious Victory in the second Karabakh war. Displayed in the exhibition is advanced weaponry showcasing the strength and power of the country's military and industrial complex, which has played an exceptional role in the Victory of the Azerbaijan Armed Forces.

It was stated that participants of the “ADEX” defense exhibition included leading the defense sector companies from Turkiye, Russia, Iran, Bulgaria, China, France, Italy, the Netherlands and other countries. Companies from Jordan are also participating in the exhibition for the first time. A total of eight countries are participating in this year’s show with their own national stands. Many countries have enlarged the areas of their national expositions.

President Ilham Aliyev reviewed the military products displayed in the pavilion of the Ministry of Defense Industry of Azerbaijan. Light and heavy military equipment manufactured in the country in recent years are on display in the pavilions of the ministry, which is responsible for the creation, production, improvement, repair, disposal, import/export and sale of defense products, ammunition, armored military equipment and other means intended for the needs of the National Security Forces. Combat reconnaissance equipment, multi-purpose, reconnaissance and strike drones, small arms of various calibers, engineering and other military equipment are among the interesting exhibits of the exhibition.

The Republic of Turkiye is one of the countries represented by the largest number of companies in the exhibition. Brotherly Turkiye, which widely uses cutting-edge and state-of-the-art defense industry technologies, is represented by a total of 42 companies. “HAVELSAN”, one of such companies, was established as part of the Turkish Armed Forces Strengthening Fund in 1982. The company not only develops technologies in the fields of defense, security and IT, but also designs its own high-tech software solutions and manufactures simulators. “HAVELSAN” has also developed new generation technologies, especially products, projects and systems related to artificial intelligence. President Ilham Aliyev got acquainted with the company's products.

“Roketsan”, another company representing Turkiye, was founded in 1988. The company designs and manufactures guided munitions, guidance and control systems, warheads, mechanical parts, algorithms and software for various types of missiles, jet weapons, launch and propulsion systems, and integrates them with land, air and sea platforms. At the same time, it provides logistical support for these systems, produces rocket fuel, develops and implements ballistic protection projects, and develops space rockets at its own facilities.

The head of state also got acquainted with the pavilions of the Islamic Republic of Pakistan. It was noted that the military products manufactured in Pakistan, which maintains military cooperation with Azerbaijan, cover all directions of the military industrial complex. It was reported that the “Pakistan Ordnance Factories” (POF) is the largest state defense industry complex that produces a wide range of weapons and ammunition according to international standards. In addition to being a leading supplier of the Pakistan Armed Forces and law enforcement agencies, POF exports products to many countries around the world. POF's subsidiaries have a high reputation for their products. “Pakistan Ordnance Factories” has obtained international quality certificates such as ISO-9001, ISO-14001, ISO-17025 and OHSAS 18001.

“Lentatek”, a Turkish drone manufacturer, is a company that has achieved success in the field of unmanned systems. The head of state was informed about the company's production of unmanned aerial vehicles, hydrogen and fuel technologies, space technologies and other production areas.

The “Dearsan” shipbuilding and ship repair plant has been among the most important enterprises of Turkiye ever since it was built in 1980. “Dearsan” specializes in the manufacture of support vessels, corvette (surveillance) ships, patrol ships, maneuverable boats, landing craft, hydrographic and oceanographic scientific research vessels, minesweepers, self-propelled boats, civilian transport ships, as well as construction or modernization of shipyards, construction of various complex military platforms such as water border protection systems, ammunition production plants.

The head of state also reviewed the Spanish pavilion of the exhibition. “Indra” is a company representing this country in the pavilion. It is one of the world's leading engineering companies and a leader in the digital industry. The company specializes in radar, electronic defense, control and communication technologies, and uses artificial intelligence and virtual reality in its systems. “Indra” is the national industrial coordinator of FCAS, Europe's largest and most advanced defense program, in Spain.

The machine-building and chemical industry enterprise is one of Turkİye’s leading institutions in the defense industry. It is distinguished for its focus on high technology and experience. The company's products are known for high quality. The enterprise offers customers a wide range of products such as military munitions – rockets, guns, explosives, gunpowder, pyrotechnics and gas masks.

“Turkish Aerospace” is a Turkish technology center in the field of design, development, modernization, production, integration and support of integrated aerospace systems from fixed and mobile air platforms to unmanned aerial vehicles and satellites. An integrated logistical service is also provided for all products designed and manufactured by ‘Turkish Aerospace”, which is among the top hundred global companies in the field of aerospace and defense.

Another company representing the Turkish defense industry at the exhibition is “ASSAN”. The company has the capabilities to design and manufacture weapons and ammunition, including their components, sub-blocks, accessories and spare parts, in accordance with international standards in modern enterprises with advanced technology.

President Ilham Aliyev also visited the pavilion of the Islamic Republic of Iran. It was noted that Iran Aviation Industry Organization (IAIO) is a state corporation established in 1966 to plan, control and manage the civil and military aviation industry of this country. The company manufactures aircraft and aerospace products.

The stand of the Pakistan Aeronautical Complex showcases maintenance tools, simulators and training systems for aircraft and aviation systems.

It was noted that the National Aerospace Agency of the Ministry of Defense Industry of Azerbaijan is focused on the development of defense products – unmanned aerial vehicles, intelligence-patrol vehicles, combat modules, various types of simulation systems, modernization in line with the requirements of the country’s power-wielding agencies, organization of serial production and export.

The President of Azerbaijan was informed that the Turkish company “Aselsan” is participating in the “ADEX” exhibition for the fourth time. The products offered by the company are received with great interest. The company, which started out as a producer of radio communication devices, now manufactures more than 500 products in the field of defense and security.

Reviewing the exhibits displayed in the national pavilions of Israel, President Ilham Aliyev was informed that the Israeli Aerospace Industry, a leader in the defense, aerospace and commercial markets, uses the most advanced technology and decades of proven combat experience to solve national defense and security problems.

The Israeli company “Plasan” is also represented in the exhibition. The company specializes in a wide range of robotic technologies for wheeled and tracked combat vehicles.

The Mine Action Agency of the Republic of Azerbaijan (ANAMA) is also extensively involved in the exhibition. In the years of operation, ANAMA has implemented a number of projects inside and outside the country. The agency is currently carrying out mine and unexploded ordnance clearance operations in Karabakh, which has been liberated from occupation.

The head of state also got acquainted with the pavilion of the Ministry of Industry and Infrastructural Development of Kazakhstan.

Thirteen companies represent the Russian Federation at the “ADEX-2022” exhibition. “Rosoboronexport” is the only state agency exporting of a full range of products, services and technologies related to the defense sector of Russia. “Rosoboronexport”, one of the leaders in the global arms market, accounts for more than 85 percent of Russia's exports in this field. The agency cooperates with more than 700 enterprises and organizations of the Russian defense industry.

President Ilham Aliyev also got acquainted with the pavilion of the Republic of Bulgaria. The President was informed that “Transmobil” was a company founded in Sofia in 1990. The company specializes in the production of high-velocity kinetic ammunition, cumulative-thermobaric grenades, high-efficiency artillery ammunition and mortars.

“Motor Sich” Open Joint Stock Company, which represents Ukraine at the exhibition, is a diversified enterprise specializing in the field of design, development, production, overhaul and technical support of military equipment. Products of the company are successfully used in more than 100 countries of the world.

President of Azerbaijan Ilham Aliyev also visited the pavilion of the People's Republic of China at the exhibition. It was reported that “CETC International Co. Ltd”, a company representing this country, is the main platform for international business and cooperation of “China Electronic Technology Group Company” (CETC). CETC was ranked 354th in the Fortune Global 500 ranking in 2021.

The head of state then reviewed the military equipment produced by the “AZAD Systems” enterprise of the Ministry of Defense Industry of Azerbaijan.

Then President Ilham Aliyev examined the military products and equipment displayed in front of the Baku Expo Center.

An extensive program has been prepared for ‘ADEX” and “Securex Caspian’ exhibitions. During the three days of the exhibition, sessions will be held on demining the occupied territories of Azerbaijan, development prospects and application areas of unmanned systems, modern weapon systems, ammunitions and their purpose, the role of armored combat vehicles in the modern combat environment, and other topics.

The 4th Azerbaijan International Defense Exhibition “ADEX” and the 13th International Exhibition for Internal Security, Safety and Rescue Equipment “Securex Caspian” exhibitions will become an excellent platform for the demonstration of the most advanced weapons and conclusion of new contracts in the field of international military and technical cooperation.