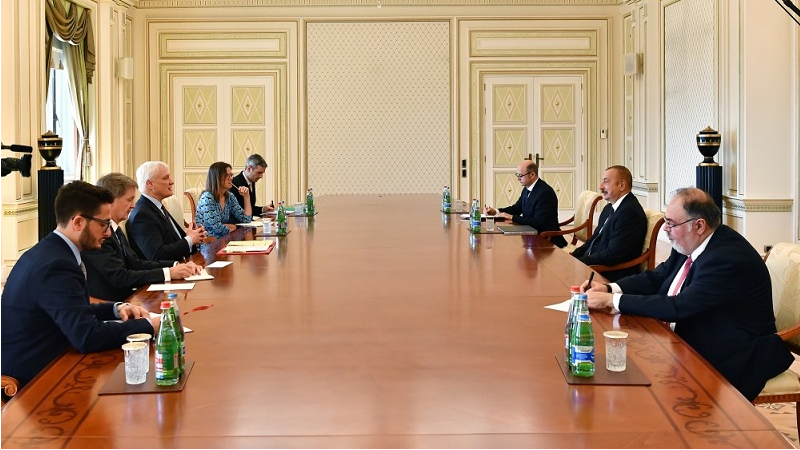 President of the Republic of Azerbaijan Ilham Aliyev has received UK Minister for Exports Graham Stuart.

Welcoming the UK minister, President Aliyev said he is convinced that Stuart’s visit to Azerbaijan will be a very important step in implementation of our plans and planning for new developments.

“Definitely it will strengthen even more our bilateral ties which develop very successfully. As you know, I have been many times in the United Kingdom. My last visit was three years ago when I met the then Prime Minister Madame May and we had very good discussions. After that, despite pandemic, relations were in a very active phase. So, this year in February we hosted Minister Madame Morton, which also, we had a very good conversation, now your visit. So, all this demonstrates a very active political dialogue, also big prospects in economic area,” the head of state said.

President Aliyev noted that UK has invested over $30 billion in Azerbaijan. “Really, it’s a lot and it helped us to develop. It helped us to develop not only in oil industry and gas industry but general development, because these investments led to additional revenues to our budget which we reinvested in non-oil and gas related areas. Today, cooperation continues very actively. BP is our strategic partner. For 30 years and at least 30 years to come, because there are new prospects, new agreements signed,” he added.

The head of state stressed that now both BP and Azerbaijan are very actively working on renewable sources of energy.

“I just received information recently from our minister that there is a plan to invest in solar power generation on the liberated areas which will be very helpful to us especially with respect to the fact that we announced liberated territories of Karabakh as a territory of green energy and smart city. At the same time, I would like to say that we already invited British companies as our partners, among the first foreign companies to work with us on the restoration, reconstruction of the liberated territories and this process already started,” he concluded.

Stuart, in turn, noted that the UK is a long standing partner and a champion of Azerbaijan’s sovereignty and independency.

“We are pleased and privileged to be a close partner with Azerbaijan and work for so many years. We are also excited on many things, but I pick out two, one is your vision, of a greener and sustainable future, which the UK is committed to and I think it is your vision to ensure that Azerbaijan has not only just a successful oil and gas economy but thinks ahead, plans strategically for a long term, because a future is going to be greener, that is where the global investment is going to go and the opportunity for us to deepen our relationship,” he added.