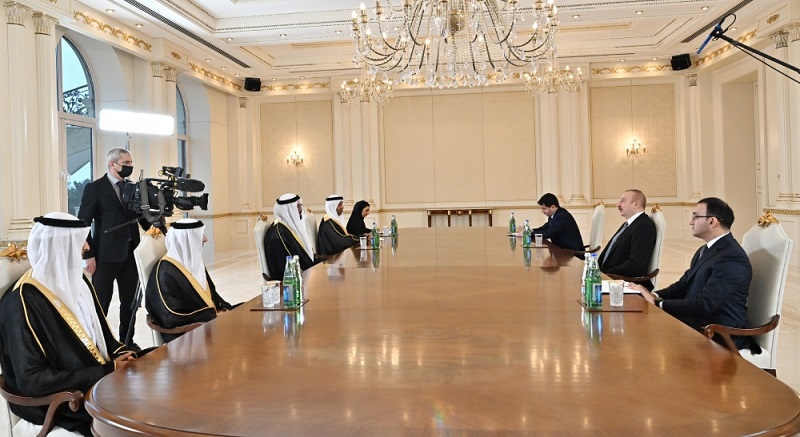 President Ilham Aliyev thanked for the greetings and asked the minister to extend his greetings to the president and vice-president of the United Arab Emirates.

During the conversation, the sides emphasized that the existence of sincere and friendly relations between the leaders of the two countries was important for the development of bilateral relations.

Mohammad bin Abdullah Al Gergawi said he had been deeply impressed by the beauty and cleanliness of Baku, and pointed out that the UAE as a friendly and brotherly country rejoiced in Azerbaijan’s achievements in all fields under the leadership of President Ilham Aliyev. He noted that close cooperation had also been established between relevant ministries and public organizations of the two countries.

Noting that he had got acquainted with the “ASAN xidmət” center and welcoming this concept with great interest, Mohammad bin Abdullah Al Gergawi said he witnessed the efficient and prompt service provided to citizens. He added that “ASAN xidmət”, operating on the principle of citizen satisfaction, was one of the visionary and excellent initiatives of the President of Azerbaijan, and underlined the importance of cooperation in this field.

Pointing out that Azerbaijan as a friendly and brotherly country, also was pleased with the achievements of the United Arab Emirates, the President of Azerbaijan noted the friendly relations with the leaders of the UAE and emphasized the importance of cooperation between the two countries. Stating that cooperation in the field of renewable energy had been expanded on the basis of a very good level of bilateral relations, the head of state mentioned the investment project of Masdar, one of the leading companies of the UAE, in Azerbaijan.

President Ilham Aliyev highlighted the devastation caused by Armenia in Azerbaijani territories during the occupation and provided information about the restoration and reconstruction work Azerbaijan was currently implementing in those territories using the most advanced urban planning concept.

The sides also exchanged views on issues of mutual interest.