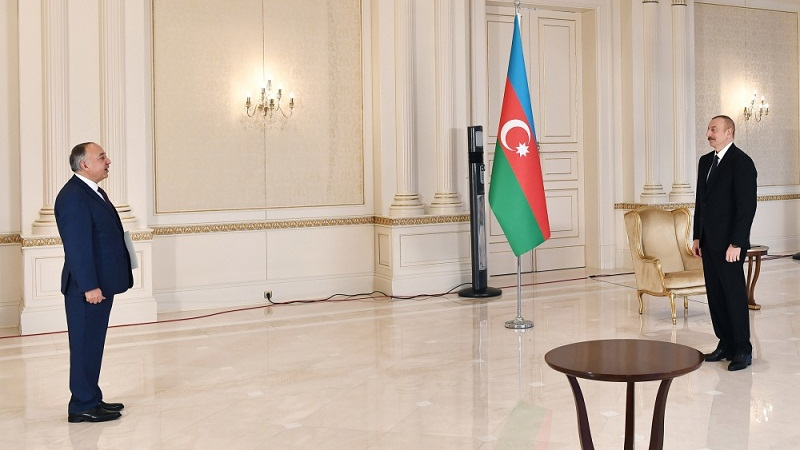 President of the Republic of Azerbaijan Ilham Aliyev has received credentials of the newly appointed Ambassador Extraordinary and Plenipotentiary of the Islamic Republic of Afghanistan Amanullah Jayhoon.

Excellency, Mr President Aliyev. First of all, I would like to thanAmanullah Jayhk you for sparing time for me today. It’s an honor for me to be here, and also, to convey the greetings of President Ashraf Ghani, who has very high regard of you. He wishes you good health and the people of Azerbaijan prosperity. Excellency President, may I have the honor to present the letter of credence signed by Excellency President Ashraf Ghani appointing me its ambassador of Afghanistan to the brotherly and beautiful country of Azerbaijan and also, allow me to present the recall letter of my predecessor.

Azerbaijani President Ilham Aliyev then spoke with the ambassador.

-Welcome Mr. Ambassador, I am very glad to see you, please, convey my best greetings to Mr. President and best wishes to him and to brotherly people of Afghanistan. We highly value our partnership and friendship. And I can tell you that relations between our countries develop so rapidly so it demonstrates that both sides have very strong intentions to intensify our dialogue. You know about my meetings with President Ghani. We met many times in Azerbaijan, in different countries during the international events. Always we find time to see each other when we are at some international meeting. And I can tell you that our meetings are very productive. So we achieved big progress in our relationship and joint efforts led to a completely new situation in our region. Our political ties are as strong as never before. We discuss a lot of issues related to economic cooperation, issues related to investment projects. As you know, we have already elaborated the ideas on that. We jointly worked on issues related to a public sector, and I am glad that "ASAN xidmət" already started its operations in Afghanistan and this demonstrates the vision of President Ghani to modernize Afghanistan, to provide modern services to the people. We are proud that we could be a part of that important development. Also, one of the important part of our cooperation is security issues. As you know Azerbaijan for almost 20 years now is part of the peacekeeping operations in Afghanistan. We, throughout all these years demonstrated commitment to security and safety of your country. As you know, relatively recently we increased the number of our servicemen, thus, demonstrating our approach, our policy towards security in your country, because without security, stability it is very difficult to build future. We know it ourselves, because we faced more or less the same in the beginning of 90s when Azerbaijan was disorganized, where the situation was chaotic. We had a political, military, economic crisis that resulted in the loss of part of our territories. Therefore, I am sure that the efforts of the government or president already bring results, and we always will be happy to be part of your modernization program. We also enjoy now the new development in regional transportation issues. We are happy that some cargos already come from Afghanistan across Azerbaijan to international markets. We are happy to provide these facilities, and as you know, the transportation sector is one of the issues which always is on our agenda during my meetings with the President, and we see good developments. With the recent changes in the regional geopolitical situation, of course, there will be more opportunities to cooperate. Also, I would like to express gratitude to brotherly Afghanistan for supporting our just cause with respect to the settlement of the conflict between Armenia and Azerbaijan. Afghanistan was always very straightforward in the issues related to the territorial integrity of Azerbaijan, always supported us, articulated on the level of high-ranking officials, president, foreign minister, other high-ranking officials that territorial integrity of Azerbaijan must be restored, and truth is on our side. And also, we felt that the support during the time of the war, Afghanistan was among the first countries to publicly express support to Azerbaijan. We are very grateful for that and the people of Azerbaijan know it, they appreciate it and we consider it as a sign of brotherhood. At the same time we consider it as a sign of respect to international law. Because historical truth, historical justice is on our side, international law is on our side. Nagorno-Karabakh is integral part of Azerbaijan recognized by all the international community as such. And the restoration of territorial integrity, the victory in the Patriotic war of course, demonstrates the power of our country, demonstrates the will of Azerbaijani people, demonstrates that we implemented what we have said before. All the promises given to Azerbaijani people and commitment to put an end to war, to liberate the occupied territories have been fulfilled. So, now we are facing the new stage of development of Azerbaijan, stage of reconstruction and rehabilitation of the territories. Those video information was delivered about the devastation on the occupied territories. All our cities and villages are ruined, all our historical monuments destroyed, our cultural monuments have been completely demolished, our mosques have been ruined or they used it as a place to keep animals, thus, insulting the feelings of not only Azerbaijanis, but all the Muslims of the world. I think that all the Muslims of the world seeing those pictures, seeing those videos, would once again understand what an evil we were facing for so many years, and what achievement we made liberating our territories, freeing our lands and going back to our roots. Armenia, as you know, is making efforts to strengthen or to create in some cases relations with Muslim countries. But I am sure that all the Muslims of the world seeing those video images would send a very strong message to their government to refrain from any contacts with the country which destroys mosques, which keeps pigs in the mosques and which cultivates Islamophobia. There could be political interests, there could be some other kind of interests but I think that all the Muslims of the world must unite their voice and deliver a strong message to aggressor that what they have done is unacceptable and would not be forgotten by the Muslims. Saying that, once again, I would like to express gratitude to the brotherly people of Afghanistan who always was side by side with us, always was supporting us during the time of negotiations, during the time of occupation, during the war time and after war when we were celebrating our victory. Once again, welcome, we wish you a pleasant stay, I am sure you will feel yourself at home here.

Excellency Mr. President, first of all I would like to express my gratitude to you. It is a great honor for me to serve as an Ambassador of Afghanistan to Azerbaijan. I am very happy to come to Azerbaijan at an extremely beautiful time. I arrived in Azerbaijan after the war ended-on 13 November. That is, three days after the victory, after the end of the Armenian occupation. I came after the Azerbaijani people regained their own lands. This is great happiness for me, because Azerbaijan is experiencing a very important historical period.

Excellency Mr. President, for me it is an honor to be in Azerbaijan, and we are sure that Azerbaijan under your leadership, under your high command, has achieved a great deal and Azerbaijan has become an important country because of its geographic location. It’s an important country for regional connectivity. Regional connectivity is a vision of President Ashraf Ghani and Your Excellency had supported that vision. When I was coming, he instructed me to convey his greetings, his good wishes for your health and security and for your health and the prosperity of the people of Azerbaijan. And also, he instructed to congratulate you on the achievements that Azerbaijan achieved under your leadership. Excellency, as you said, Afghanistan and Azerbaijan have a long relationship. And this relationship always has been very good. 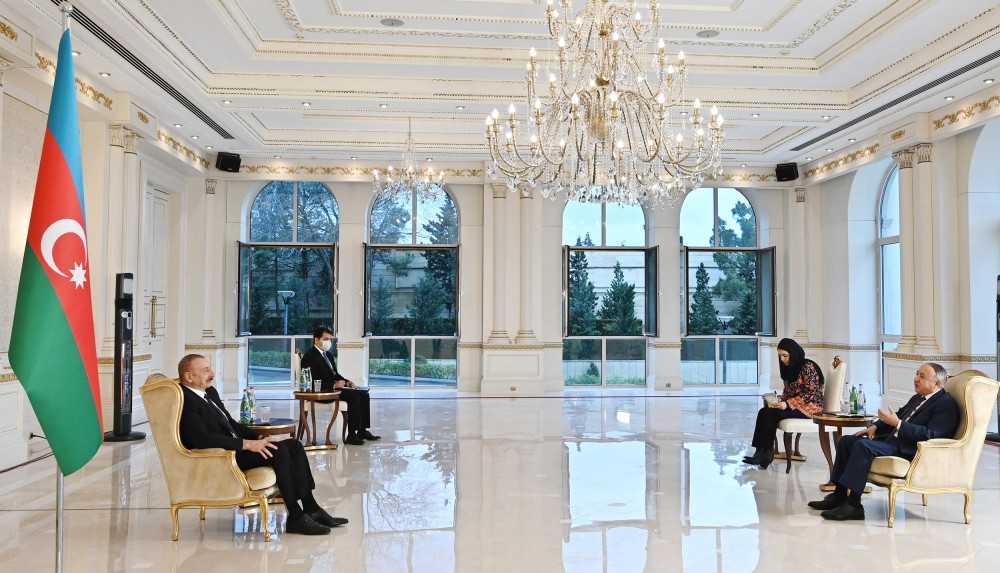 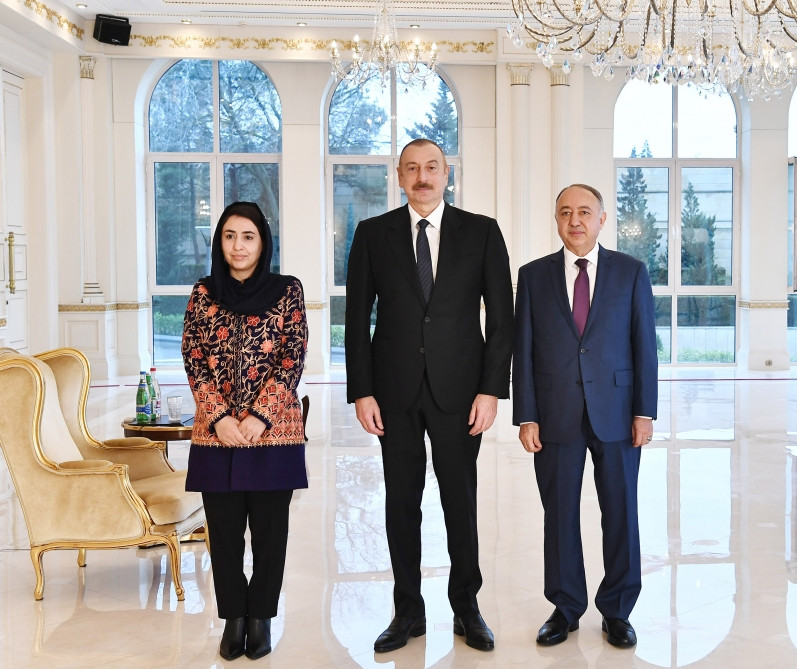