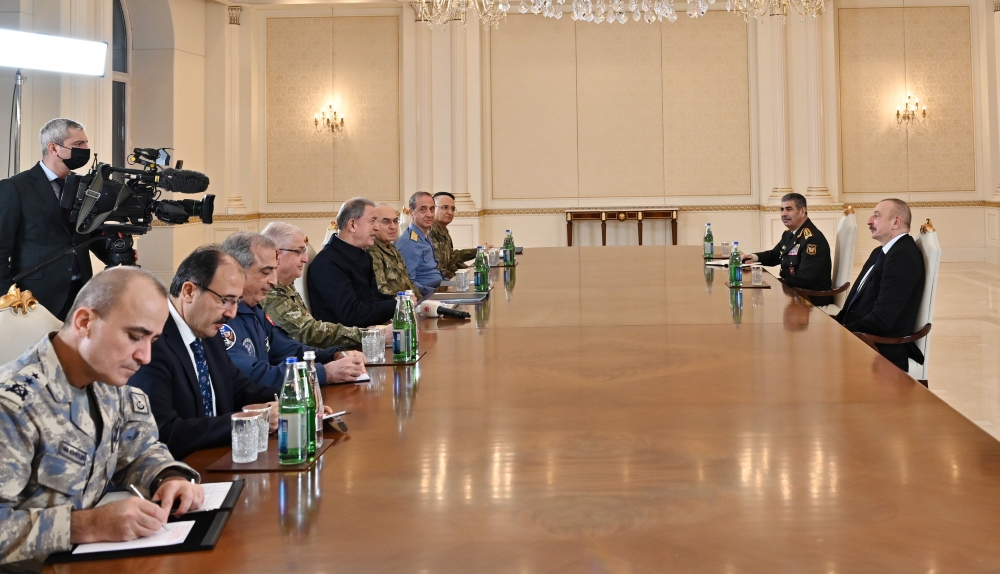 Hulusi Akar extended the greetings of President of the Republic of Turkiye Recep Tayyip Erdogan to the head of state.

President Ilham Aliyev thanked for the greetings, and asked the minister to extend his greetings to Recep Tayyip Erdogan.

They noted that 2022 is also a very successful year in terms of developing friendly and brotherly relations between Azerbaijan and Turkiye, and emphasized that the bilateral relations are getting stronger in all areas, including the military field. The sides underlined that the Azerbaijan-Turkiye joint military exercises currently held in Azerbaijan are of great importance in this regard. They pointed out that Azerbaijan and Turkiye will always stand by each other.

Saying that his visit to Azerbaijan was on the eve of the commemoration day of national leader Heydar Aliyev, Hulusi Akar emphasized once again that the memory of the national leader has always been remembered with deep respect in Turkiye.

During the conversation, they specially mentioned the role of regular meetings held between the presidents of Azerbaijan and Turkiye in developing the bilateral relations, and hailed the fact that cooperation in the military and other fields continues successfully based on the decisions made by the two presidents.

The sides expressed confidence that Hulusi Akar`s visit to Azerbaijan will contribute to the expansion of relations.

They also exchanged views on the prospects for cooperation.