President Ilham Aliyev: Creation of new generating capacities is a manifestation of our overall development 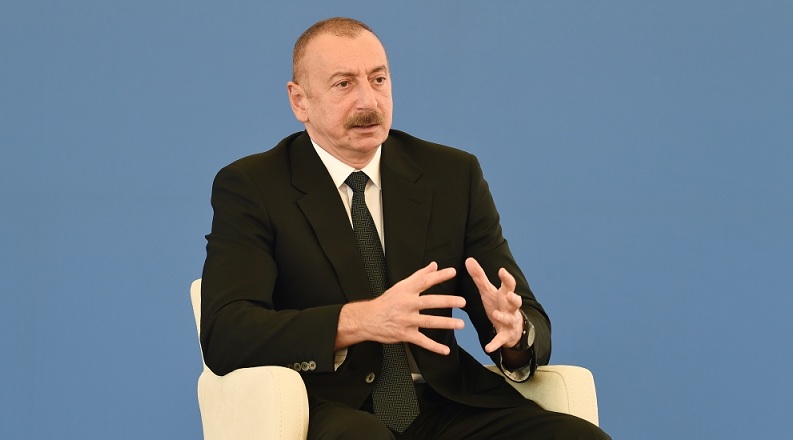 “The creation of new generating capacities is a manifestation of our overall development. The modernization of our energy system is consistent with the overall development of our country, and all this work is carried out in a planned manner,” President Ilham Aliyev said at a meeting with power engineers following the groundbreaking ceremony for the Gobu Power Station.

“As you know, the construction of power plants has a special place among infrastructure projects. I can say that we have started to deal with this issue as a first priority. It is no coincidence that the first State Program on the socio-economic development of the regions adopted in 2004 attaches special importance to the construction of power plants. Since then, more than 30 power plants have been built in our country. Of course, I would like to mention the large stations among them. If these stations had not been built, we would not be able to reach our energy potential today. I remember that following the adoption of the first regional development program, the 525-megawatt Sumgayit Power Plant was built. This was followed by other stations – the “Canub” station with a capacity of about 800 megawatts, the “Shimal-2” station with a capacity of about 400 megawatts, the Sangachal Power Plant with a generation capacity of 300 megawatts. Five modular stations have been built in different parts of the country, each with a generation capacity of about 90 megawatts.

Just imagine that if these stations had not been built, we would still be as dependent on imports as in previous years and unable to ensure our own energy security. It is the attention paid to the power engineering sector and the allocated public investment that has allowed us the opportunity to fully meet our needs. At the same time, we have a strong export potential. Despite the growing domestic demand, our export potential is growing every year. Since 2004, our economy, including our industrial potential, has more than tripled. As a result of the application of modern technologies, both generating capacities are emerging in Azerbaijan and, at the same time, losses are decreasing,” the head of state said.