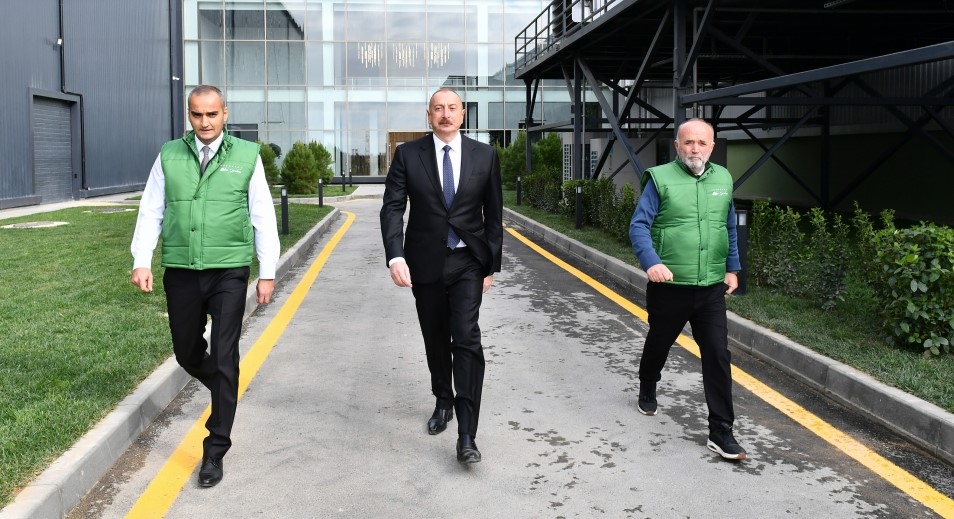 First, President Ilham Aliyev watched a video about the work done on the establishment of the olive growing complex.

The representative of “Abşeron Zeytun Bağları” LLC, Ramzi Shukurov, informed the head of state about the activity of the enterprise.

It was noted that the olive growing complex of “Abşeron Zeytun Bağları” Limited Liability Company was a result of the successful implementation of the development concept of the non-oil sector and agriculture in Azerbaijan. The project was implemented through joint cooperation of experts from Azerbaijan, Spain, Israel, Italy, Portugal and Turkiye.

Then the head of state planted an olive tree in the area.

It was noted that the project involved clearance of an area of 787 hectares of hard rock in Goshagishlag village, which administratively belongs to Zira settlement. It was previously unfit for any agricultural activity. Olive groves of “Arbequina”, “Arbosana”, “Imperial”, “Gemlik”, “Manzanillo”, “Blanqueta”, “Koroneiki” and other varieties imported from Spain, Portugal, Turkiye and Greece were planted on an area of 697 hectares.

The complex covers a total area of 3,000 hectares. As a result of landscaping and planting of a garden on a large area, what used to be a wasteland has been revived and the climate and flora of the area restored. In accordance with the market demand, olives for oil, table and mixed species were planted in the area. In the following years, the plan is to continue planting an area of 1,162 hectares of olive groves in Gurgan settlement.

Consultant of “Absheron Olive Gardens” LLC Murat Kucukcakir: Yes, we harvested last year as well. This year there is more than expected. While the world is experiencing drought and low productivity due to various reasons, we will hopefully exceed our target this year. We are living a wonderful year. We are still in our fourth year.

President Ilham Aliyev: How much do you harvest from a hectare?

Murat Kucukcakir: Our goal is to get 10 tons of produce from a hectare. This year it will be around 2,500-3,000 kilograms. To reach this number in the fourth year is truly a wonderful achievement. We have a great team here. We work together in a beautiful environment of great cooperation. I am very happy to be doing this wonderful work with this team.

President Ilham Aliyev: Very nice! How much will this cover domestic demand?

President Ilham Aliyev: We have created such a beautiful complex on a vacant piece of land. Throughout history, there was nothing here. Nothing was planted, but we create miracles everywhere.

President Ilham Aliyev: Of course, it will have a positive effect on the climate, nature and people's health.

It was noted that the Vice-President of the Heydar Aliyev Foundation, founder and head of the IDEA Public Union, Leyla Aliyeva, visited the complex in 2019 and planted the first olive tree in the area where the olive groves were subsequently planted.

For the purpose of watering the gardens, fully automated irrigation systems were built in cooperation with the Israeli company Netafim.

Then President Ilham Aliyev was also informed about the work done at the factory.

It was indicated that the factory with the capacity to produce 4,000 tons of olive oil per year was built in cooperation with the Italian company Pieralisi. Five production lines have been established at the enterprise. Cold pressed Extra Virgin olive oil is produced at the plant.

Then President Ilham Aliyev viewed samples of olive oils produced at the enterprise.

It was brought to the President’s attention that samples of products were analyzed in the laboratories of the Azerbaijan Institute of Food Safety and were found to be in compliance with the current requirements.

The head of state launched the factory, got acquainted with the production process and the operation of the laboratories.

The President of Azerbaijan was informed about the ‘New Holland” equipment installed in the complex. It was noted that the harvesting process was based on the world's leading technology of the ‘New Holland” harvester, which is applied at the “Abşeron Zeytun Bağları” LLC for the first time in Azerbaijan.

President Ilham Aliyev also got acquainted with the table olive processing area of the enterprise.

It was noted that the table olive processing area with the capacity to receive a thousand tons of raw olives per year has been established in cooperation with the Turkish company “Tutkun Makina”. In the future, by increasing the number of fermentation tanks, there are plans to increase production output to 2,000 tons per year. The facility offers green, black, seeded and seedless, sliced, stuffed, crushed olives. There are opportunities for the production of table olive products.

Experts from Italy said they were pleased to meet with the head of state.

Hailing the conditions created at the enterprise, President Ilham Aliyev highlighted the prospects of this field. He said: Azerbaijan will join the family of countries that produce and export olives and olive oil.

Italian specialist: You will clearly join this family with a high-level factory. You will go straight to the top league.

President Ilham Aliyev: Thank you. Of course, we have plans to expand production. In particular, we plan to make maximum use of unused land for olive production, especially here on the Absheron Peninsula and in some other areas of Azerbaijan.

Italian expert: We are here to serve and support you.

President Ilham Aliyev: Perhaps in the near future we will need to expand production. I think that this is why our cooperation with your company will be of strategic importance. Because there is potential here in Absheron, as well as the liberated areas. Of course, all this will be evaluated from the point of view of soil, climate and productivity. But we have serious plans to become an important player. We also have plans to create thousands of jobs and local manufacturing across the country.

About 350 people are employed in “Abşeron Zeytun Bağları” LLC. In addition to the domestic market, its products will be exported to foreign markets under the “Made in Azerbaijan” brand.