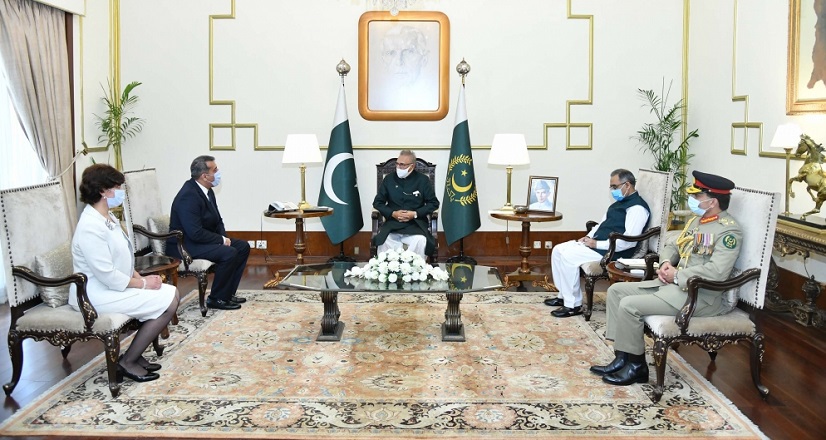 Relations between Pakistan and Azerbaijan will continue to strengthen and deepen, Pakistan’s President Arif Alvi said, the Azerbaijani Embassy in Pakistan told News.Az.

The president made the remarks as he received the credentials of the newly appointed Azerbaijani Ambassador to Islamabad Khazar Farhadov.

At the meeting, the diplomat conveyed greetings and best wishes of Azerbaijani President Ilham Aliyev to the Pakistani leader.

Farhadov noted the high level of relations between the two fraternal countries, stressing the special role of the heads of the two states in this.

The ambassador spoke about humanitarian and social projects implemented in various regions of Pakistan on the initiative and with the support of the First Vice President of Azerbaijan, President of the Heydar Aliyev Foundation Mehriban Aliyeva.

Noting that Azerbaijan and Pakistan support each other both bilaterally and internationally, Farhadov focused on the political and moral support that Pakistan provided to Azerbaijan during the second Karabakh war, and expressed gratitude to the government and people of this country.

The diplomat stressed that Azerbaijan supports Pakistan's position on resolving the Kashmir issue on the basis of UN Security Council resolutions.

Touching upon high-level ties between the two countries, Arif Alvi noted that humanitarian projects implemented in Pakistan on the initiative and with the support of Azerbaijan's First VP Mehriban Aliyeva, make a special contribution to these ties, and also expressed confidence that that relations between the countries will be strengthened and deepened in the future.

Congratulating the government and people of Azerbaijan on the victory in the 44-day second Karabakh war, Arif Alvi highly appreciated the support provided by Azerbaijan to Pakistan on the Kashmir issue.

The parties also stressed the importance of developing cooperation in all areas, especially in the trade and economic sphere, in accordance with the high level of political relations.