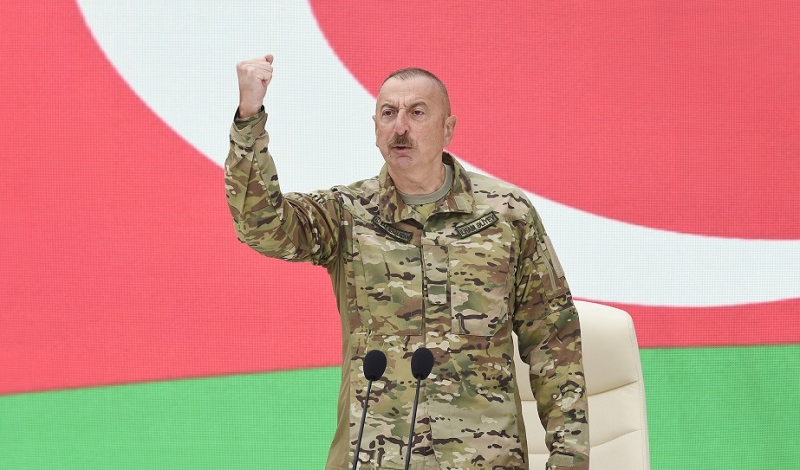 After the Shusha operation, Armenia fell to its knees, and this operation is a separate epic, and it will be talked about for a long time, said Azerbaijani President Ilham Aliyev during a meeting with servicemen after the inauguration the Military Trophy Park in Baku on Monday.

“But anyone visiting Shusha and seeing those steep cliffs cannot imagine how this impregnable fortress was taken. We liberated Shusha only due to the professionalism, courage, heroism and national spirit. The enemy fell to its knees, bowed its head, threw in the towel, admitted defeat, signed an act of surrender on 10 November, and we returned the occupied Kalbajar and Lachin districts and the part of Aghdam district that was under occupation without a single shot being fired,” the head of state said.

President Aliyev stressed that the second Karabakh war is Azerbaijan’s glorious history, and the Azerbaijani people will always be proud of this war.

“We have established ourselves in the world as a victorious people. Armenia, however, is a country that has suffered defeat, a country that has fallen on its knees before us, a country with a bowed head, and it will always be the case. One is horrified to see the vandalism they have committed. All our cities and mosques have been destroyed. Cows and pigs were kept in our mosques, they insulted the entire Muslim world, destroyed and plowed up graves, stole gold teeth even from buried people. If they are not savages, then who are they?” he added.

The president said people visiting the liberated Azerbaijani lands and foreign visitors can see everything with their own eyes.

“We simply must never forget Armenian barbarism. We are a very kind people. This is our advantage, but at the same time, one cannot be kind when there is a barbarian in front of you. We must give them an answer that they will forever preserve it in their historical memory, so that this is never erased from their memory. Certain revengeful forces raising their heads there today should know that the iron fist remains in place and, if necessary, we can strike them in such a way that all this will end forever,” the head of state concluded.