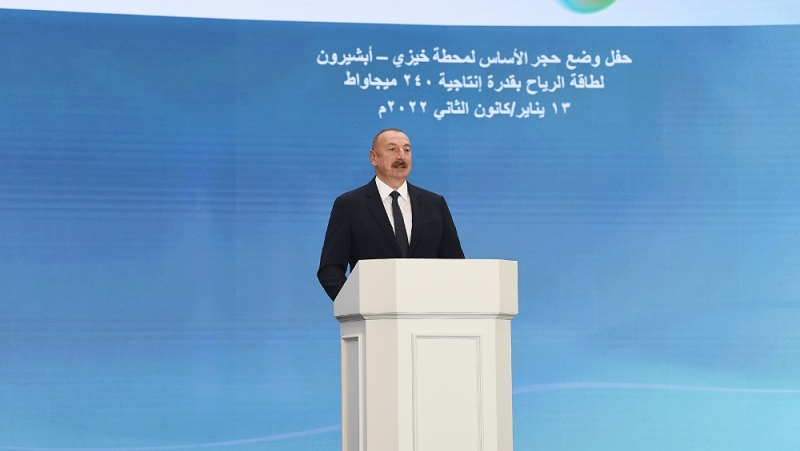 Baku on Thursday hosted a groundbreaking ceremony for the “Khizi-Absheron” Wind Power Plant to be built by Saudi Arabia’s ACWA Power. The ceremony was attended by President Ilham Aliyev and Saudi Arabia's Minister of Energy, Prince Abdulaziz bin Salman al-Saud.

“It is a very significant day in the life of our country today. The foundation of a new wind power plant to be built in Azerbaijan is being laid at the Gulustan Palace. I heartily congratulate you and all the people of Azerbaijan on this occasion,” the head of state said at the ceremony.

The establishment of this station once again shows that the Azerbaijani state attaches great importance to the production of renewable energy, President Aliyev noted.

He recalled that about a year ago, the Ministry of Energy of Azerbaijan and Saudi company ACWA Power signed an executive agreement.

“In fact, the decision was made to build the station, we have been working hard for the past year, and today we are celebrating this wonderful day together. This plant will be the largest power plant in the renewable energy sector in Azerbaijan. Its capacity is 240 megawatts, and, of course, as I said, it will contribute to the energy security of our country and create many jobs. The issues in our plans to save natural gas will also be resolved. Of course, this station will be of great importance in reducing the adverse impacts on the environment,” the head of state added.