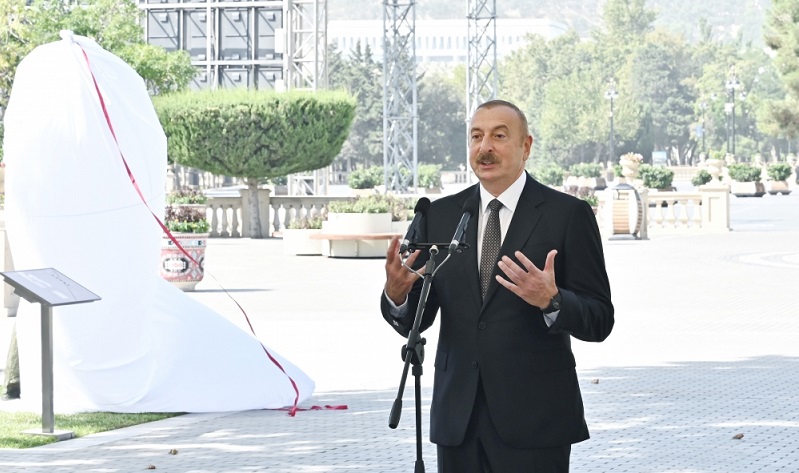 The people of Azerbaijan are rightfully proud of Muslum Magomayev because he was both a great singer and a great composer, President Ilham Aliyev said on Wednesday.

The head of state made the remarks while speaking at an unveiling ceremony for world-renowned singer Muslum Magomayev at the Baku Seaside National Park, News.Az reports.

“Dear friends, today is the 80th anniversary of the birth of Muslum Magomayev, the prominent son of the Azerbaijani people. Today, a statue of Muslum Magomayev is being unveiled in one of the most beautiful places in Baku. We are gathered for this ceremony. Those who knew Muslum and still love him will be unveiling this beautiful statue together,” he said.

President Aliyev stressed that the people of Azerbaijan are rightfully proud of Muslum Magomayev because he was both a great singer and a great composer.

“He was unmatched on the Soviet stage. In fact, the songs performed by Muslum Magomayev make us all emotional even today. All of us have our own memories of Muslum, including myself. I have known Muslum and Tamara since I was a teenager. They were very dear guests of our house. I have many wonderful memories. Of course, every year in August, we welcomed Muslum and Tamara to our home and celebrated Muslum's birthday at our place,” he said.

“Muslum was someone who was very attached to his native country. Although he spent most of his career in Moscow and on tour to other cities of the Soviet Union, he came to Baku several times a year, gave concerts and was always in touch with his friends. In particular, we had a number of meetings and very cordial relations both in Moscow and Baku,” the Azerbaijani leader added.