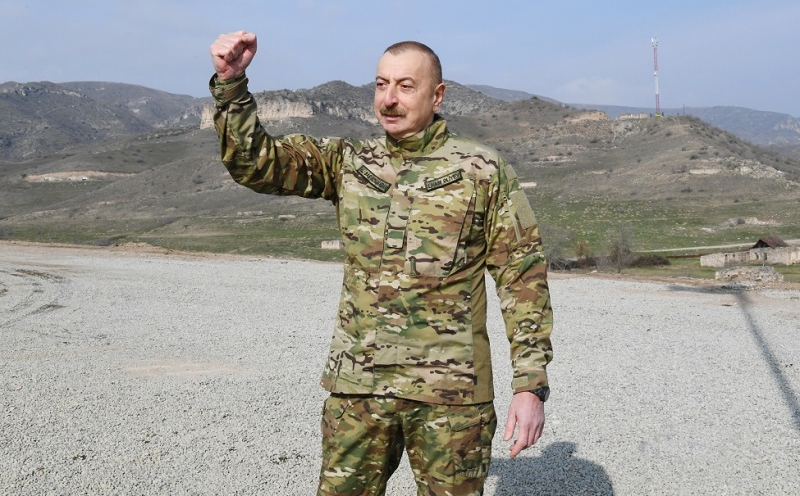 Revanchist forces are trying to raise their heads in Armenia even today, they are trying to threaten Azerbaijan with more provocations and another war, Azerbaijan’s President Ilham Aliyev said during his speech in Gulabird village, Lachin district.

“They must understand that we are paying attention to everything, that we keep everything under control and will never allow Armenian fascism to raise its head again,” the head of state emphasized.

“We drove out the enemy out of our native lands, threw it out of here. It is safe to say that we have destroyed the Armenian army. There is no Armenian army. It has been defeated. There is neither equipment nor manpower left. They have acknowledged that they had 10,000 deserters during the war. There was not a single deserter in the Azerbaijani army. This testifies to the high morale of our people and our army. This is a manifestation of the current policy,” he added.

The head of state stressed that Azerbaijan gained a victory on the battlefield.

“We liberated these lands from the invaders in battles. Having inflicted a defeat on Armenia, we forced it to sign an act of surrender on 10 November and return Lachin, Kalbajar and Aghdam districts to us because it never wanted to return Lachin and Kalbajar districts to us during the negotiations. This was the main reason for the lack of progress in the negotiations. Unfortunately, the position of Armenia and some of its foreign patrons consisted in returning five districts to Azerbaijan, so that Azerbaijan would be content with this and Nagorno-Karabakh would someday be given independence, while Kalbajar and Lachin districts would remain under the eternal control of Armenia. I rejected that offer,” President Aliyev concluded.