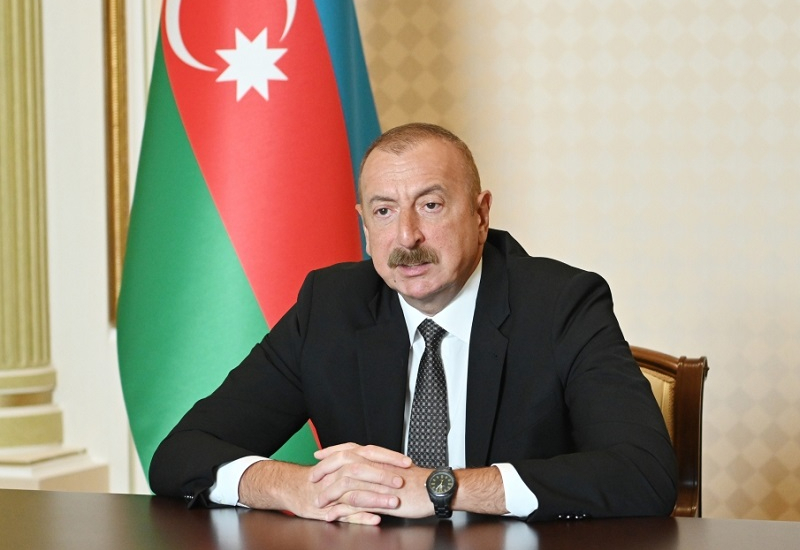 There are large river resources in the liberated Azerbaijani lands, said President Ilham Aliyev as he received in a video format Zaur Mikayilov due to his appointment as Chairman of Azerbaijan Melioration and Water Management Open Joint Stock Company.

“We were deprived of them. Today, our rivers originating in the liberated lands are our main rivers. The Tartarchay originates in the territory of Kalbajar district. But the contemptible enemy deprived us of the water of the Tartarchay. When I enquired about this problem during my repeated visits to the Karabakh region, I saw that it creates big problems. For example, the water of Tartar was completely cut off. The Tartarchay river was almost dry in many places. Now we have returned to the Tartarchay, to its source. The Bazarchay, which is also called the Bargushad river, the Hakari river, the Okhchuchay – there are many rivers, more than 10 rivers originating there. Their potential must be analyzed. There must be a proper analysis of the river flow and how we can use these rivers effectively. Many of them flow into the Araz River,” the head of state said.

President Aliyev stressed the need to examine whether there is a need to build reservoirs in the liberated lands.

“Of course, our largest source of water in the liberated lands is Khudafarin and Giz Galasi reservoirs on the border with neighboring Iran. These are very large reservoirs. The volume of the Khudafarin reservoir is 1.6 billion cubic meters - it is a very large reservoir. In order to use this reservoir, of course, additional infrastructure projects must be implemented. First of all, canals must be built so that we can take water from these reservoirs to the liberated lands – Zangilan, Jabrayil, Gubadli and other districts, and use it effectively. This has great potential,” he added.

The president also emphasized the importance of carefully analyzing the country’s water resources both in the liberated lands and in other parts of the country.

“Specific programs and proposals must be submitted to make the best use of these water resources. So there is a lot to be done in this area, both in the liberated lands and in other areas. The main principle should be modernity, environmental safety and maximum efficiency, so that the people of Azerbaijan, those engaged in agriculture see positive changes in their lives. I am sure it will be the case,” the head of state concluded.