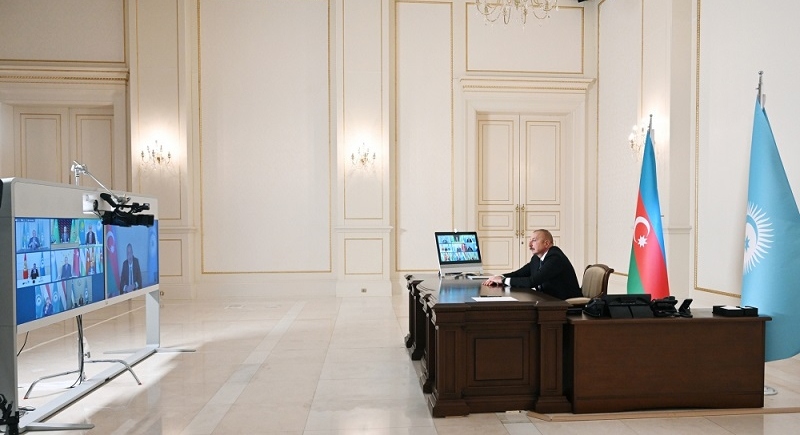 Armenia still does not give Azerbaijan the maps of minefields, and this is another war crime, said Azerbaijan’s President Ilham Aliyev.

The head of state made the remarks at an informal summit of the Turkic Council held in a video conference format on Wednesday.

President Aliyev once again noted that everything in the liberated Azerbaijani lands has been destroyed.

The Azerbaijani leader recalled that foreign and local journalists have called Aghdam ‘the Hiroshima of the Caucasus’.

“After the liberation of Fuzuli, there was not a single safe building left in the city for us to raise the Azerbaijani flag on. Armenians have destroyed all our cities, destroyed all our historical sites, plowed cemeteries, destroyed graves, destroyed more than 60 mosques and kept cows and pigs in half-demolished mosques. These videos are available online.”

“In other words, this is an insult to the entire Muslim world, a crime, and the whole world already sees and should see that. We have fulfilled our historic mission. We have destroyed the Armenian fascism. At present, restoration work has begun. After the war, many Azerbaijani civilians and servicemen were killed and wounded by landmines. Armenia still does not give us maps of minefields. This is another war crime. Therefore, de-mining will take more time. Without the completion of this work, of course, we will not be able to return our IDPs and refugees to those lands,” the head of state added.