President Aliyev: All baseless accusations against Azerbaijan will not remain unanswered 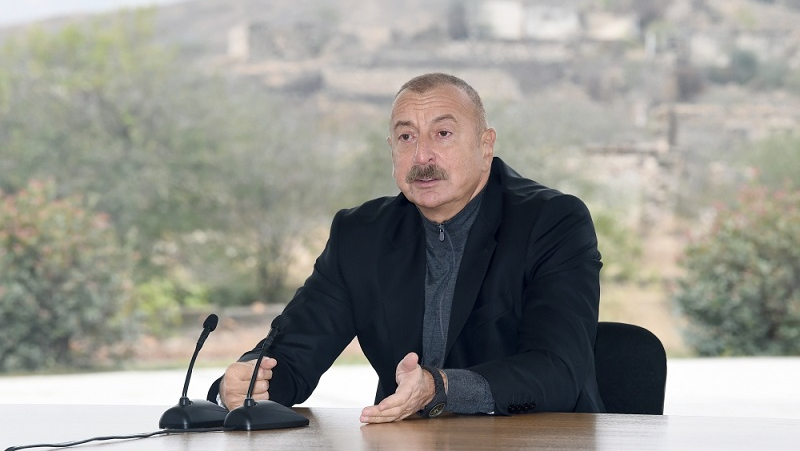 All baseless accusations against Azerbaijan will not remain unanswered, President Ilham Aliyev said as he met with members of the general public of Jabrayil on October 4.

He noted that Azerbaijan brushes off and denies these allegations, and demands evidence.

“Some Iranian provincial mullah recently opened his mouth and fabricated slander against Azerbaijan. When I was informed, I said not to pay attention. We can’t pay attention to the words of some provincial mullah. Who is he after all? Just don't pay attention to that. Then, unfortunately, some government officials started making unfounded accusations against us – Azerbaijan has allegedly brought Israel to these regions. Let them open their eyes wide and look. Where did they see Israel here? Not a single person lives here. There is no building here. Is there evidence? No. If there is no evidence, everyone should be held accountable for what they say. We cannot allow anyone to fabricate baseless slander against us,” President Aliyev added.

The president pointed out that Azerbaijan is a country pursuing an independent policy.

“Everyone knows this, and this is not the first year we have pursued an independent policy. We build relations with our neighbors and all other countries through an independent policy. No-one can interfere in our internal affairs. It is our own business to establish relations with any country. After all, we do not sue countries that have close and friendly relations with Armenia. See how many patrons Armenia has – the second Karabakh war showed it. See how many countries support Armenia today. So should we be enemies with these countries? No. We acknowledge the sovereign rights of these countries. It is their sovereign business. True, deep inside we may be worried about this, this may hurt us, especially when neighboring countries are particularly active in relations with Armenia. But we never say that. We respect the sovereign rights of each country and demand that everyone respect our sovereign rights too and not interfere in our internal affairs. Such attempts have been made before and all of them have failed. I want to say again that the accusations against us must be proved officially. Let them come and see if there is a single foreign citizen in this region,” the head of state concluded.