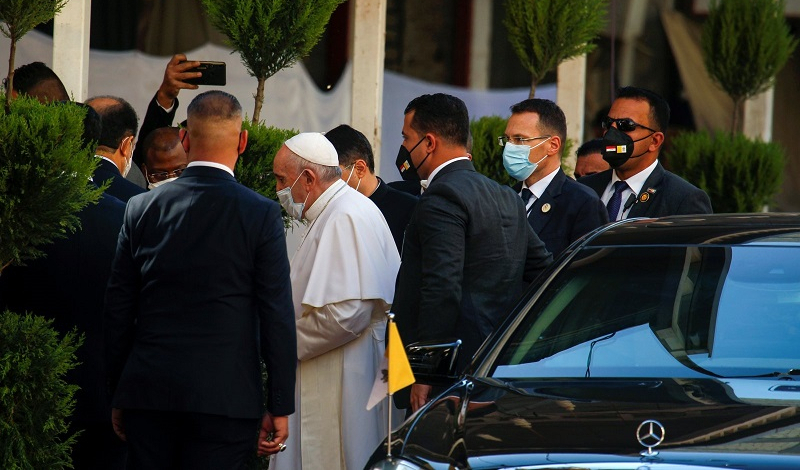 Pope Francis met with Grand Ayatollah Ali al-Sistani, one of the most senior clerics in Shiite Islam, in Iraq's holy city of Najaf on Saturday to deliver a message of peaceful coexistence, AP reports.

The historic meeting in al-Sistani's humble home was months in the making, with every detail painstakingly discussed and negotiated between the ayatollah's office and the Vatican.

The closed-door meeting was expected to touch on issues plaguing Iraq's Christian minority. Al-Sistani is a deeply revered figure in Shiite-majority Iraq and and his opinions on religious matters are sought by Shiites worldwide.

On the few occasions where he has made his opinion known, the notoriously reclusive al-Sistani has shifted the course of Iraq's modern history.

In the years after the 2003 U.S.-led invasion he repeatedly preached calm and restraint as the Shiite majority came under attack by al-Qaida and other groups. The country was nevertheless plunged into years of sectarian violence.

His 2014 fatwa, or religious edict, calling on able-bodied men to fight Daesh terror group swelled the ranks of Shiite militias. In 2019, as anti-government demonstrations gripped the country, his sermon lead to the resignation of then-prime minister Adil Abdul-Mahdi.

Pope Francis arrived in Iraq on Friday and met with senior government officials on the first-ever papal visit to the country. It is also his first international trip since the start of the coronavirus pandemic.

Iraqis have welcomed the visit and the international attention it has given the country as it struggles to recover from decades of war and unrest. Iraq declared victory against Daesh in 2017 but still sees sporadic attacks.

It has also seen recent rocket attacks by Iran-backed militias against U.S. military and diplomatic facilities, followed by U.S. airstrikes on militia targets in Iraq and neighboring Syria. The violence is linked to the standoff between the U.S. and Iran following Washington's withdrawal from the 2015 nuclear accord and its imposition of crippling sanctions on Iran.