Perpetrators of Khojaly tragedy must be punished - Italian journalist 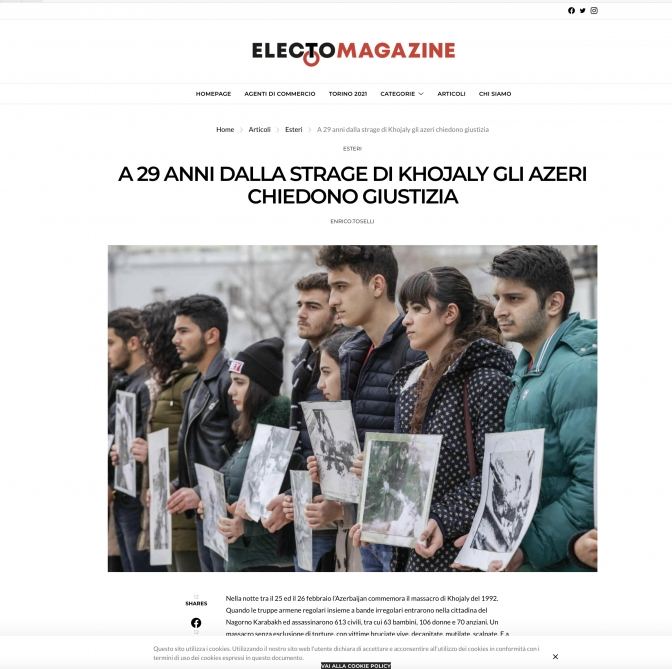 Toselli wrote that the Khojaly tragedy of 1992, when 613 Azerbaijanis, including 63 children, 106 women, and 70 elderly, were brutally killed in the Azerbaijani town of Khojaly on the night of February 25-26, is commemorated every year, adding that the crime perpetrators still remain unpunished.

Citing the statements of the Minister's Committee under the Council of Europe and the European Court of Human Rights about the events in Khojaly, the author stressed that it’s not enough to condemn such crimes against humanity by international organizations, but it’s also necessary to punish the perpetrators of this tragedy.

Speaking about the importance of continuing steps at the international level to promote the Khojaly tragedy, the author said that the legislative bodies of different countries have adopted documents in memory of the victims of the Khojaly genocide.

The author also emphasized that during the 44-day (from late Sept. through early Nov.2020) Patriotic War (of Azerbaijan for liberating its territories from Armenian occupation), the Armenian Armed Forces also committed war crimes against the Azerbaijani peaceful residents, striking numerous civilian objects, including houses, schools, hospitals, and other structures with missiles.

The article said that Azerbaijan liberated its lands from occupation during the Patriotic War and wanted to achieve peaceful coexistence in these territories again, but requires the final punishment of those responsible for the Khojaly massacre and payment of compensation to the families of the victims.

On Feb. 25-26, 1992, the Armenian Armed Forces, supported by the 366th infantry regiment of Soviet troops, stationed in Khankendi city, committed an act of genocide against the population of the Azerbaijani town of Khojaly.

As many as 613 civil residents, including 63 children, 106 women, and 70 old people were killed in the massacre, 1,000 people were injured, and 1,275 were taken, hostage. Most of the town residents haven’t returned from the hostage, and their fate still remains unknown. After the withdrawal of the 366th regiment from Khankendi, the military equipment that belonged to it mainly passed to the Armenian separatists.