Paradise city. All about Azerbaijan’s Shaki 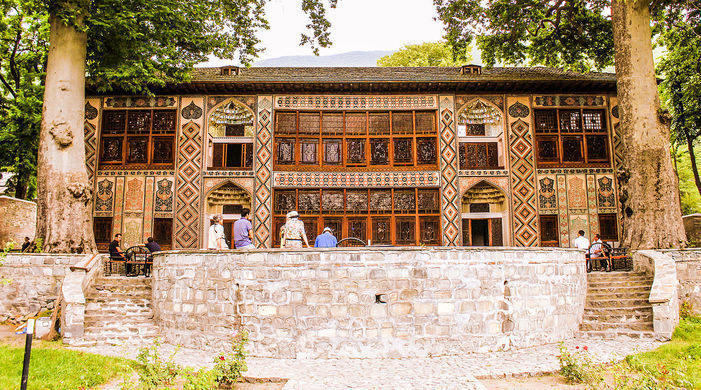 Although every single city has its specific beauty, some towns are distinguished by its historical background and some by its mountains and forests.

Shaki city is always in the area of the interest of both foreign and local tourists with its picturesque forests and historicity, Trend reports. The town known as Nukha was renamed to Shaki in 1968.

It is possible to go to the city located 370 km far from Baku for about 4.5 hours in three ways (Kurdamir, Agsu, and Ismailli). The shortest route is Ismailli road. Mainly, drivers of sedan cars prefer this road, because, the highway passing through Ismayilli road is beautiful and shorter than others. You feel cold when passing from here even during the hottest day of summer, because the leaves of the trees on both sides of the road do not let sunlight go through.

Shaki is not too big. Two days is enough for going sightseeing in the city. The people of the city are very hospitable and they try to help tourists in any matter.

The city is located in the south of the Greater Caucasus, and its road is upside-down and not very wide. Even though all roads have been covered with cobblestone in the past, currently the main parts are paved.

Some roads are being reconstructed due to the setting of its sewerage system. The “arch” have been built along the roads for flowing of rainwaters to the river.

The river passing through the city center gives a special beauty to Shaki. Shaki is like Georgian Tbilisi both for this aspect, and for historicity. When you passing through the narrow streets of Shaki, you feel like you are inside the ancient Azerbaijani films. Almost, the Caucasus snowy mountains are seen from each street.

The air of the city is cool and fresh because it is located on the slope of the mountains. It is impossible to get exhausted from heat on summer days. Sometimes, continuous rain may be annoying.

The museum built in 1762 is one of the places attracting the most attention of its guests and accepting hundreds of tourists every year. The building has been built during the reign of Hussein Khan, the grandson of Chalabi Khan, who founded the first independent khanate in Azerbaijan. Although the palace is inside the castle, it is surrounded by additional walls.

The spectacularity of the palace is that during the construction no glue or nail has been used. There are bird pictures, plot illustrations, fight and hunting scenes in walls of the two-storey palace. Tastefully decorated niches, mirrored fireplaces are an example of true art. The niches have been decorated with illustrations were drawn to the "Layla and Majnun", poem of Nizami Ganjavi.

The plane trees were planted beside the pool are 400 years old. (They was planted in 1532). The width of the trees is 13.50 meters and the height is 42 meters. It is prohibited to cut the trees down as they preserved by "The Red book".

There are a museum, Albanian temple, a cafe serving national dishes and Shaki dishes, shops selling handicrafts in the yard.

It is allowed to riding the horse, taking photos in the yard surrounded by castle walls. Even there was a man praying on the lawn.

The most delicious treat everyone asks to bring from Shaki is “baklava”. Although, this sweet is named “bakhlava” in some Azerbaijan region, however, local residents call it “halva”. It is one of the most preferred desserts by the city's guests.

Two or three slices of halva, which is made from rice flour, nut or hazelnut, and “sherbet”, are enough to enjoy its taste because of its sweetness. If desired you can replace sherbet with honey. The price of the halva is 6 manat ($3.5). Guests’ favorite halva is Ali Akhmad’s and Yahiya’s products.

The exact information about the history of Shaki Halva has not been reached so far. There are currently more than 60 halva shops in Shaki. Many of them are belong to local residents.

When someone says piti in Azerbaijan, Shaki comes to mind. Piti is a meal made in pottery called "dobu". AlthoughiIt looks like "bozbash" for the first glance, however, they are different absolutely. The distinctive feature of piti which made from meat, chickpeas, and chestnut is crushing before eating. In ancient times, local residents have used the “rumka” for crushing chickpeas. Most times, when the piti is served, sumak with onion slices are also placed next to it.

You don't feel hungry for 6-7 hours when you eat “dobu” piti. The piti reportedly was given to the workers in ancient times due to its high calories.

If you are in Shaki, you may choose “Gagarin” restaurant, which is located on way to the Shaki Khan palace. Because the meal at this restaurant is tasty and the view of the city seems gorgeous from here.

There were five caravanserais in Shaki. Only two of them - Upper and Lower caravanserais have been remained until now. The palace, built in the 18th century for travelers and caravans, is now used as a hotel and there is a restaurant, where national dishes are served.

You feel gorgeous when entering the old palace, which is full of green trees. The ceiling of the inner part of the gates is the cupola, which is made from brick.

Caravanserai is one of the most favorite places which all of the visitors choose here for photo shooting. The Azerbaijani film “Hem ziyaret, hem ticaret” (Visit and trade), in which actor Haji Ismayilov co-starred with Nuriya Ahmadova, was shot in the yard of the Caravanserai. Even President of Turkey Recep Tayyip Erdogan has also been here.

There are also sightseeing places such as Markhal, Soyuqbulag, Galarsan-Gorersen fortress, Mustafa bay's place, and Khan lowland in Shaki. A restaurant surrounded by greenery has been built near the Soyuqbulag. The road to the Markhal passes near the Soyugbulag. The water of this spring is like ice and very tasty.

Gelersen-Gorersen fortress is located on the coast of the Kish river, about 4 kilometers from Shaki city center. The path to the castle is tiring because it is upright. However, it is worth to be breathless for its amazing view.

The fortress built to protect from enemy still maintains its actuality. In general, this is not the only sightseeings to see in Shaki. Even though the city is far from Baku, however, it is worth to visit Shaki for its beautiful panorama.