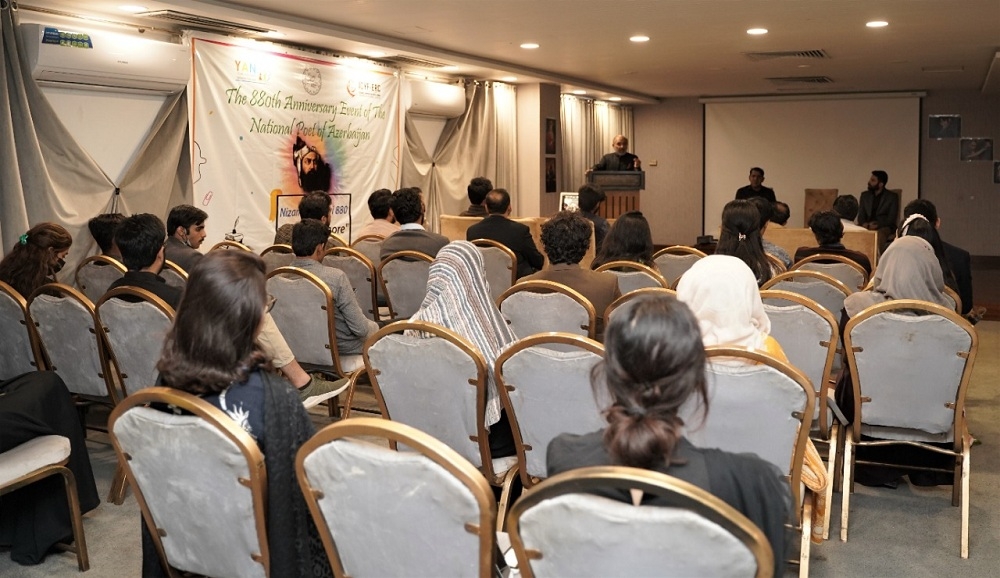 The Pakistan Youth Advocacy Network (PYAN) and the Eurasian Regional Center of the Islamic Cooperation Youth Forum (ICYF-ERC) have co-organized an event dedicated to the 880th anniversary of the great Azerbaijani poet and thinker Nizami Ganjavi in Lahore, Pakistan.

Addressing the opening ceremony, which was held both in the audience and online format, Chairman of the PYAN Fsahat Al-Hassan, Azerbaijani Ambassador to Pakistan Khazar Farhadov, Pakistan's Ambassador to Azerbaijan Bilal Hayee, Acting Director General of ICYF-ERC Vusal Gurbanov welcomed the participants and emphasized the importance of the event. The speakers noted the role of such events in promoting cultural relations between Pakistan and Azerbaijan. Minister of Social Welfare and Beytulmal of Punjab province Syed Yaver Abbas Bukhari emphasized that the event would contribute positively to the development of connections among the youth of both countries. Pakistan’s support for Azerbaijan's fair position on the Nagorno-Karabakh issue was also highly appreciated.

During plenary discussions, Deputy Dean of the Faculty of Oriental Studies of Baku State University Shahin Yusifli, teacher of the University of Education of Pakistan Jabir Huseyn, Chairman of the Pakistan-Azerbaijan Alumni Association Qaisar Navab, Pakistani poet and social media expert Usva Zeynab, PYAN project manager Danish Tarig highlighted the importance of Nizami Ganjavi's works, his contributions to medieval eastern poetry, and the similarities between Nizami and Pakistani poet Allama Igbal's poetry. The event, which was attended by students, scientists, and experts, as well as representatives of leading public institutions of Pakistan, featured ghazals of Nizami Ganjavi.

The main purpose of holding such events by the ICYF-ERC is to introduce cultures of peoples to each other within the Islamic geography. The event is aimed at contributing to the study of Nizami Ganjavi's poetry in the Muslim East, and promoting the humanist ideas of the poet.

This is the fifth international event, organized by the ICYF-ERC to mark the 880th anniversary of Nizami Ganjavi.