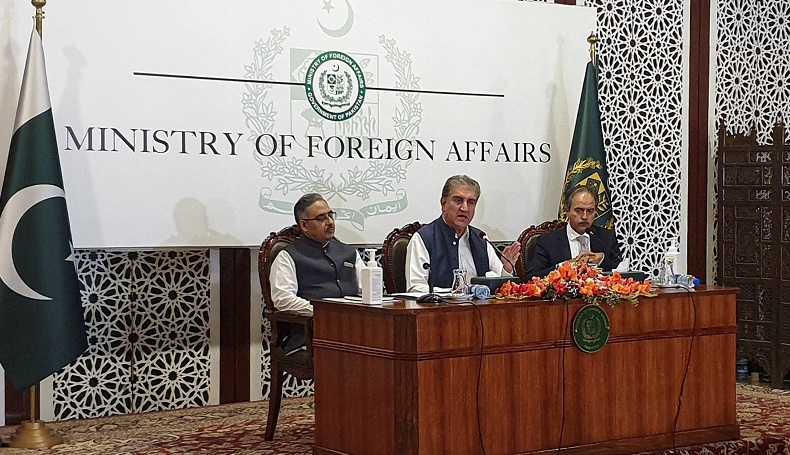 Speaking at a news conference in Islamabad, Qureshi said it was his first visit to the Afghan capital since the formation of a new government and the meeting with the Taliban leadership was fruitful.

"I found the Taliban leadership very positive, and they acknowledged and thanked Pakistan for the efforts and help it has extended to Afghan refugees who have been living here for the past four decades," Qureshi said. He said a number of issues relating to visas, trade, security and borders were discussed during the meeting with Afghanistan's new leaders.

"Being an immediate neighbor, we want to help our Afghan brothers, and my visit today was part of that plan," he said.

In order to support Afghan people and traders, Pakistan announced the elimination of all tariffs on fresh fruits and vegetables coming from Afghanistan. Qureshi also said that Pakistani authorities would no longer require Afghans crossing the border to obtain a "gate pass” from the Interior Ministry and border crossings will now be open for pedestrian movement for 12 hours instead of eight.

Key border crossings will remain open 24 hours for trade, he added. He also announced a visa upon arrival for Afghan traders and people with medical emergencies, while the embassy in Kabul has been authorized to issue five-year multiple visas to Afghan traders.

He also announced 5 billion Pakistani rupees ($28.8 million) in aid for Afghanistan and said his country will provide medicines and other essential items to help its Afghan brothers and sisters. Earlier in the day, Qureshi along with Lt. Gen. Faiz Hameed, the director-general of the country's premier spy agency, Inter-Services Intelligence (ISI), and other key officials arrived in Kabul on a daylong visit.

Qureshi was accompanied by Pakistan’s Special Representative for Afghanistan Muhammad Sadiq, the director-general of the Inter-Services Intelligence (ISI) of Pakistan, the foreign secretary, the secretary of commerce, the chairperson of Pakistan International Airlines, the chairperson of the National Database and Registration Authority (NDO) and officials from the Federal Board of Revenue and Interior Ministry.

"I told the Taliban leadership that the Pakistani nation stands with its Afghan brothers and sisters in this difficult time and I came here to resolve all their issues related to trade and visas," Qureshi said.

He added that in today’s meeting, both sides agreed that Afghan officials will visit Islamabad soon to sit down with their Pakistani counterparts and resolve all minor issues.

"My visit's aim was also to know the views of the new government regarding our connectivity projects with Central Asia, like the Central Asia-South Asia power project (CASA-1000), the Turkmenistan-Afghanistan-Pakistan-India natural gas pipeline (TAPI) and the Trans-Afghan Railway Line Project with Uzbekistan and Afghanistan," Qureshi said. "I am very happy to share that they expressed their full support on all of these projects.”

"We are working on a regional approach," he said, adding he will participate in a meeting of the foreign ministers of Afghanistan's neighboring countries scheduled for Oct. 27 in Tehran.