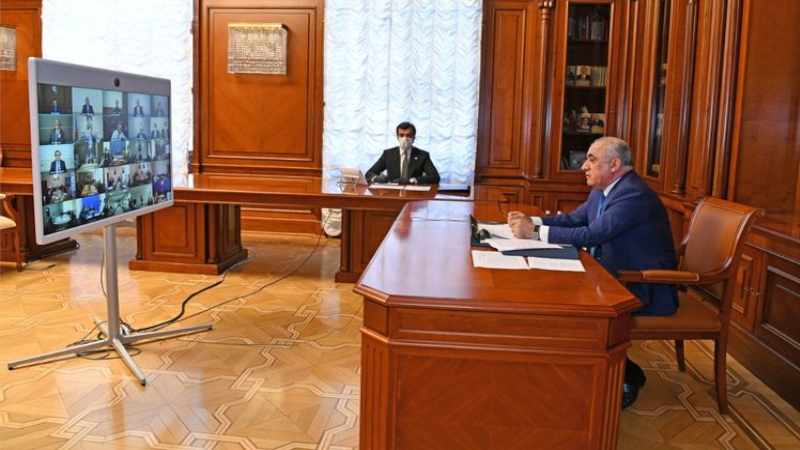 Under the instructions of Azerbaijani President Ilham Aliyev, the Operational Headquarters under the Cabinet of Ministers on Saturday held a videoconference to discuss issues of strengthening control over the coronavirus-related special quarantine regime.

The videoconference was chaired by Prime Minister Ali Asadov.

Assistant to the President of Azerbaijan - Head of the Department for Territorial and Organizational Issues of the Administration of the President of the Republic of Azerbaijan Zeynal Naghdaliyev, Prosecutor General Kamran Aliyev, Interior Minister Vilayat Eyvazov, Head of the State Security Service Ali Naghiyev, Economy Minister Mikayil Jabbarov, Finance Minister Samir Sharifov, Health Minister Ogtay Shiraliyev, Head of the Food Safety Agency Goshgar Tahmazli, Chairman of the State Agency for Mandatory Health Insurance Zaur Aliyev, TABIB Chairman Ramin Bayramli, heads of the executives authorities of 68 cities and districts, prosecutors of cities and districts, heads of departments of internal affairs and State Security Service, as well as heads of sanitary and epidemiological centers, heads of central district hospitals and health departments joined the videoconference.

The prime minister noted that during the August 6 videoconference President Ilham Aliyev gave serious instructions to various government and state bodies to strengthen control over the quarantine regime.

Asadov recalled that given the decrease in the number of coronavirus infections and the need to increase economic activity, the Operational Headquarters decided to ease restrictions in some production, trade and service areas from August 10.

The prime minister underlined the need to synchronize economic activity and comply with sanitary regulations.

The main bodies responsible for compliance with the adopted rules are the executive authorities of cities and regions, law enforcement agencies - the Prosecutor's Office, the Ministry of Internal Affairs, the State Security Service, healthcare agencies and entrepreneurs whose activities are permitted. Responsibility for an increase in COVID-19 cases in areas whose activities are permitted rests entirely with entrepreneurs.

It was emphasized that the ongoing process is fully controlled by the head of state. The government will regularly report to the president on the situation.

During the videoconference, the participants also discussed the state of control over compliance with quarantine rules in the country over the past month and made proposals to eliminate the shortcomings revealed.

Moreover, the technical, administrative and educational aspects of the control over the quarantine rules were discussed.