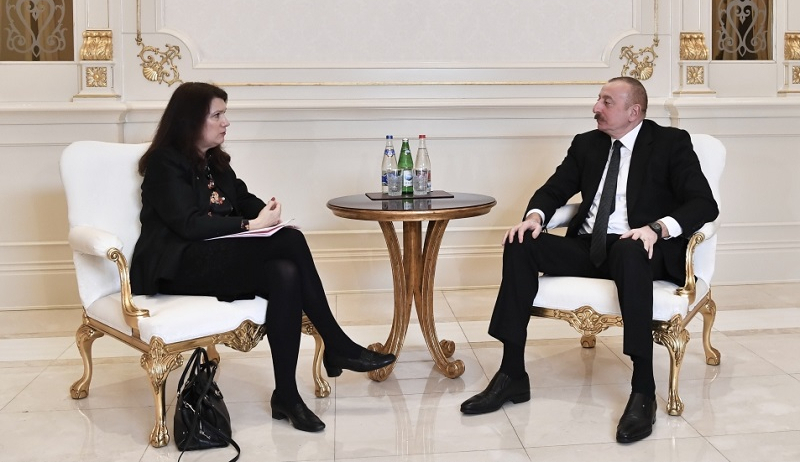 Opening of communications will be in the benefit of all the regional countries, President of the Republic of Azerbaijan Ilham Aliyev said as he received a delegation led by Minister of Foreign Affairs of Sweden, OSCE Chairperson-in-Office Ann Linde.

The head of state noted that OSCE is an organization which is directly involved in the resolution of the conflict between Armenia and Azerbaijan.

“So, now the conflict is already in the history and we need to look to the future. And we discussed today with you our views how to build the future. We think four months which passed after war already demonstrate the will of both sides to turn the page and to concentrate on the future. This is very important,” he said.

“As far as we are concerned, we already started the rehabilitation of the liberated territories. The program of reconstruction is already being implemented. A lot is to be done, because everything is destroyed on the liberated territories-the cities, the villages, the cultural monuments, all infrastructure. So there will be really a very big scope of work. It’s more than 10 thousand square kilometers of totally destroyed area. We already started the process of negotiations on the opening of communications between Armenia and Azerbaijan. That was part of the statement which was signed on November 10. Negotiations already had several rounds, different levels and I think that this particular issue can be a starting point for completely turning the page of war and leaving it to the history. Because opening of communications will be in the benefit of all the regional countries. We will create new opportunities, bring new dynamics to regional cooperation. And it can bring after many other areas of potential cooperation. I already publicly spoke that Azerbaijan is ready for that,” President Aliyev added.