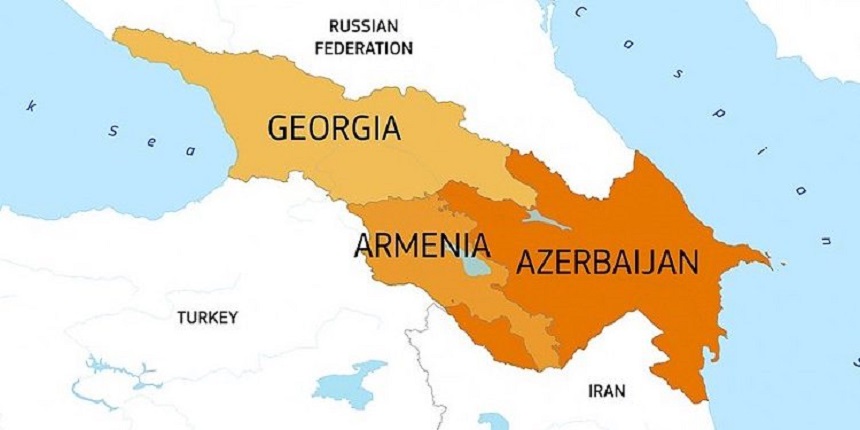 News.Az presents the article by Ilham Naghiyev, chairman of Odlar Yurdu Organization in the U.K. and chairman of the board of A2Z LLC, a leading IT company in Azerbaijan.

Backed by the juggernaut of the Chinese state, the "Belt and Road" project has been a hotspot for international investment for over a decade.

A glance at the map shows the most direct land route for trade between Asia and the West passes through the Southern Caucasus. Yet this ancient branch of the "Silk Route," famous in history and legend, has until now been sidelined by investors and policymakers.

All that could be about to change.

The Southern Caucasus has been in large part an economic "frozen zone," with border conflicts in all three countries -- Azerbaijan, Armenia and Georgia. Azerbaijan and Armenia have been at loggerheads over Armenia’s 30-year occupation of Karabakh, and Georgia and Russia have clashed over the territories of Abkhazia and South Ossetia. With a few isolated exceptions such as BP’s investment into Azerbaijan’s extensive Caspian oil and gas fields, the region has struggled to attract transformative FDI.

UNCTAD’s latest World Investment Report shows the results. While Azerbaijan recorded a respectable FDI stock of $32 billion in 2019, and Georgia a modest $19 billion, the figure for Armenia — despite the efforts of its influential international diaspora — was just $5 billion. A  cocktail of conflict and closed borders has deterred all but the most adventurous of investors.

A series of changes underway in the region suggests the possibility of re-evaluation: the promised re-opening of borders, new transit infrastructure linking to global networks, national policies on economic diversification and the move beyond carbon, and a series of investor-friendly reforms.

Taken together, these four factors could put the region back on the international investment map.

The opportunity to re-open borders is a direct result of the deal signed between Azerbaijan and Armenia last November, which marked the end of the "Karabakh war." An important clause specifies that "all economic and transport connections in the region shall be unblocked." While it would be naive to suppose that the passage from a generation-long conflict to peaceful co-operation could ever be easy, the economic peace dividend which this could bring — particularly to isolated and landlocked Armenia — provides a powerful incentive.

One interesting signal has been the renewed and positive economic dialogue between Armenia and Turkey after four decades of closed borders. Both countries' leadership have in recent weeks been setting a different and pragmatic tone. Progress on the ground between the two would be a diplomatic breakthrough for economic realism and could open the door to opportunities across the region.

Recent years and months have also seen important developments in the region’s global connectivity: the Baku-Tblisi-Kars rail line, opened in 2017, provided an important link in the chain which allowed the first-ever rail freight journey from China to Turkey last December. This demonstrated the region’s central importance to the Trans-Caspian International Transport Route — more memorably branded the "Middle Corridor" — just in time to remind the world during the Suez Canal blockage of the strategic importance of alternatives. At the same time, it showed that the region’s geography allows Azerbaijan and Georgia to co-operate on ambitious projects across their shared border. Meanwhile, only a few tens of kilometers of rail remain to be completed across Azerbaijan’s southern border with Iran to finalize a key route on the new and promising "Mumbai to Moscow" North/South Corridor.

Reforms have dramatically improved conditions for foreign investment. The latest Doing Business report from the World Bank, comparing the favorability of conditions across 190 states, rates Azerbaijan and Georgia in the top 40. Meanwhile, free economic zones — such as the  Alat zone — simultaneously help solve export infrastructure issues while providing attractive incentives to international investment partners and entrepreneurs.

In the 1850s, Sweden’s Nobel brothers sent agents to the Southern Caucasus prospecting for new sources of high-quality timber to use as gun stocks for their flourishing small arms business. They found the trees – but they also, quite literally, struck oil. The result was the world’s first oil boom, predating even the U.S. The brothers were swiftly followed by the Rothschilds and a host of international entrepreneurs.

The region is now moving beyond oil. But it is also moving beyond conflict and closed borders.   While politics and conflict have for so long dominated the fate of the Southern Caucasus, now is a moment when international business would do well to re-evaluate the region. Today’s prospectors might, like the Nobels, discover opportunities they hadn’t thought possible.

Ilham Naghiyev is an Azerbaijani economist, author, IT entrepreneur, co-founder and the Chairman of the Board of GESCO OJSC, the founder of “Odlar Yurdu” Organization. He graduated from Azerbaijan State University of Economics in 2004, and CASS Business School in 2009. Currently, he is following his education in TRIUM (HEC PARIS, London School of Economics, New York University Stern School of Business joint program) Executive MBA.