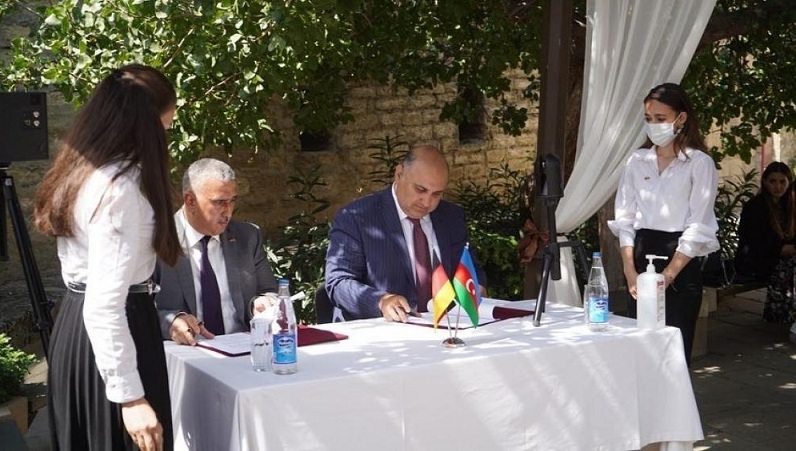 Baku's historic core, the walled Old City or Icherisheher is brimming with tourist destinations. The Old City visitors have a chance to enjoy a 360-degree 3D model of Shirvanshah's Palace.

A memorandum has been signed between the management of the Icherisheher State Historical Reserve and the EKM Global company.

The project will be present to mark Icherisheher's inscription on UNESCO's World Heritage List.

The Old City, including the Palace of the Shirvanshahs and Maiden Tower, became the first location in Azerbaijan to be classified as a World Heritage Site by UNESCO.

Numerous unique monuments, mosques and minarets, the ruins of caravanserais and bathhouses make this place one of the most popular tourist attractions in the city.

The document was signed by the head of the Reserve's Administrative staff Read Gasimov and EKM Global company director Elshan Musayev.

Restoration and conservation works are currently carried out in the Icherisheher State Historical and Architectural Reserve with the support of the Heydar Aliyev Foundation. In general, there were several baths in Icherisheher. The baths of the Shirvanshahs Palace, Gasim bay, Haji Bani, Agha Mikail, Agha Zeynal and the underground bath are historical monuments that are protected by the state.

Not far from Gosha Gala there is also Baku Khans' Palace, dating back to the 17th-18th centuries. Until 1806, the rulers of the khanate used this complex as their residence.

Baku Khans' Palace includes residential buildings, a khan’s garden, an underground bathhouse, a medieval well, the ruins of a pottery workshop, an irrigation system, a khan’s mosque. Restoration and conservation, as well as improvement work here began in September 2018.

Baggal Gallery, which holds exhibition-sale of souvenirs and traditional crafts, a book house as well as cafe also operate here.

There is also a beautiful park, which will undoubtedly become one of the most favorite places for recreation for Baku residents and the city's guests.

After reconstructions, Baku Khans' Palace will function as a museum. Here, the wide audience will learn the history of ancient Baku city, revived by modern technologies. The museum's opening ceremony is scheduled for the end of the year.