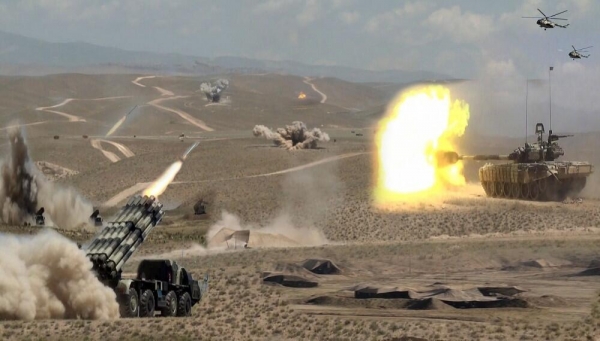 For the first nineteen years of the state of Israel’s existence – 1948-1967 – the Syrian government, which was extremely hostile to the Jewish State, had its army entrenched and bunkered on the Golan Heights. The Golan directly faced the Israeli portion of the Jordan Rift Valley and the many Israeli kibbutzim and villages spread all over the valley.

On the Golan Heights higher grounds’ strategic positions the Syrian army dug deep bunkers in which they positioned long-range cannons and tanks, all ready to fire, at will, at Israeli, mostly civilian positions.

For 19 years that Syrian artillery constantly bombarded the Jordan Valley Israeli communities nestled below, till the Six Day War, in which the Israeli military conquered the Golan Heights.

The Syrians also planted untold numbers of landmines in the territory. Since 1967, the work to clear up the Golan Heights of the land mines the Syrians left behind has been ongoing. Much has been cleared already but there is so much more to clear. When one travels in the Golan Heights one witnesses large barbed wired spaces with alerting notices to be aware of landmines. 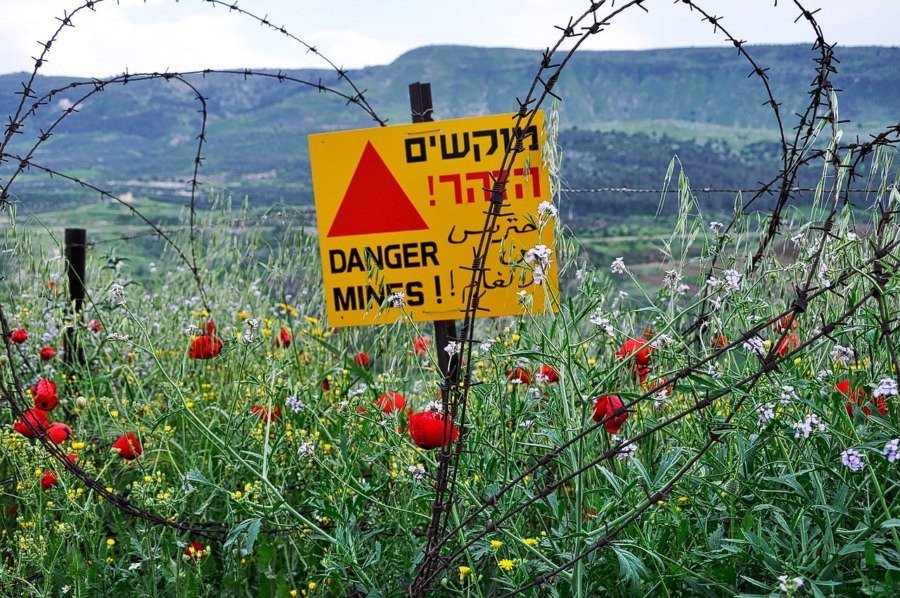 The Syrians never used the Golan Heights for any other purpose than to attack Israel from there. Maliciously, when they retreated they did not leave behind the landmines’ mapping plans. Therefore, for over five decades, since the war ended, the clearing efforts have been excruciating and costly, preventing agriculture development and expanding the building of civilian communities. Successively, people also stepped on unmarked landmines and lives have been lost or people were wounded. Of course the Syrians’ ultimate goal of land mining the territory was to kill as many Israelis as possible.

Next a discussion of Armenia and its land-mining operation against Azerbaijan.

Armenia ends its presence in Karabakh

Enough has been written about the Nagorno-Karabakh conflict of 1992-1994, that started when Armenia, assisted by the Russian army, invaded the Nagorno-Karabakh region and seven surrounding districts of Azerbaijan, mostly inhabited by Azerbaijanis. The Armenians ethnically cleansed the entire territory of its 800,000 Azerbaijanis, making them internally displaced persons (IDPs) in Azerbaijan. Along the way of crimes against humanity, Armenian forces massacred many Azerbaijani civilians.

The conflict was brought to its end, starting on September 27, 2020, after Armenia fired the first bullet. Azerbaijan responded. The 44 days of fighting ended on November 10, 2020, with a peace deal brokered by Russia. Outside of Nagorno-Karabakh region, with Russian peacekeepers guaranteeing safe passage through the region of Lachin, which separates Nagorno-Karabakh from Armenia, Armenian forces agreed to return to Azerbaijan all occupied territory. Almost 80 percent of the land that Armenia illegally occupied during the last 30 years was returned to Azerbaijan.

According to Azerbaijan National Agency for Landmine Action (ANAMA), during the years of Armenian occupation of Azerbaijan’s lands, Armenia planted over 100,000 landmines in an area covering around 830 million square meters. The question is why?

The Armenians mistakenly thought they would have a permanent presence in Nagorno-Karabakh. When they realized that this credence was about to change and in the face of a military defeat they would be forced to permanently leave the occupied territory, they accelerated the planting of landmines and explosives, not only in the seven districts around Nagorno-Karabakh, but also in Nagorno-Karabakh itself, the territory they claim to be so treasured to them.

Since these areas are under the Russian peacekeepers’ control they are now tasked to demine the landmines’ infested territory. Subsequently, while dismantling the landmine, already one Russian serviceman has been killed in Nagorno-Karabakh. It was said that while being transferred to the hospital the officer died from heavy wounds he incurred after a landmine exploded near the city of Shusha, in Nagorno-Karabakh.

Discovered explosive objects and unexploded ammunition are removed and destroyed and ammunition that cannot be evacuated is being destroyed on the spot.

As of January 11, 2021, Russian landmine demining specialists have so far cleared of landmines 566 hectares of territory, 210 km of roads, 802 houses, including 22 socially significant objects i.e. schools, parks, medical institutions and sports facilities and some 23,759 explosive objects from unexploded ordnance in Nagorno-Karabakh. So far about 19,000 explosive objects were found and neutralized.

According to a briefing by Major General Igor Konashenkov, Head of the Russian Ministry of Defence Department of Information and Media Affairs, on Nov. 26, 2020, Russian engineers have cleared mines from two school buildings(!) in the city of Khankendi. 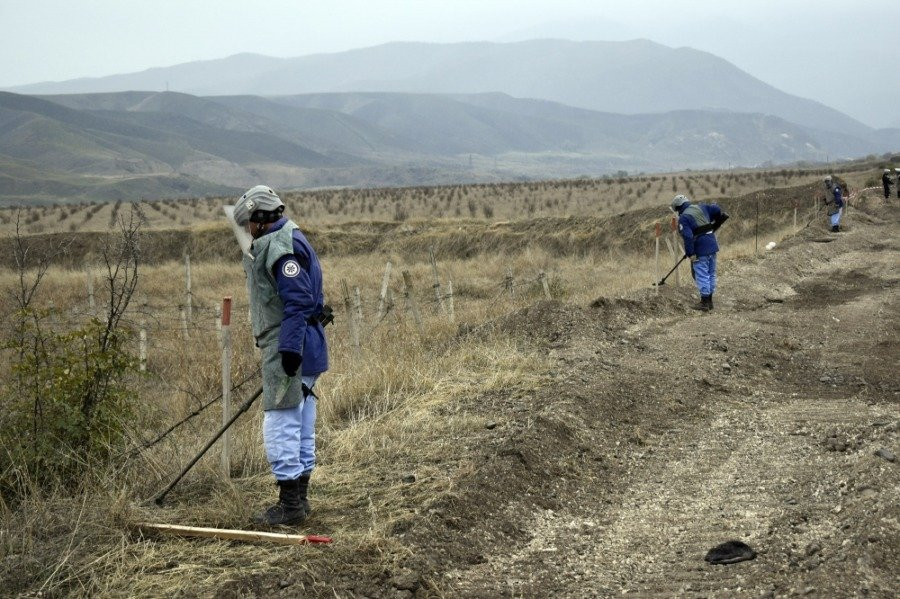 Armenia has refused to submit mapping plans for the land mines and other explosives they planted in the occupied areas. According to ANAMA it will take up to 10 years to completely demine the liberated territory, a very dangerous and expensive process.

The comparison here is clear: both Syria and Armenia are villains. Syria, bordering with Israel and Armenia in the South Caucasus region it shares with Azerbaijan and Georgia.

Since its hostility against Azerbaijan began, Armenia never had any peaceable intention, to live in peaceful coexistence with its neighbor, Azerbaijan. All Armenia did for three decades was orchestrate a political ruse.

More so, Armenia never had any intention to obey the United Nations Security Council’s 1993 four legally binding resolutions that demanded Armenian forces withdraw from Azerbaijan’s regions occupied by Armenia. Armenia also was not an honest side when it dealt and negotiated with the OSCE Minsk Group, established in 1992, to encourage a peaceful, negotiated resolution to the conflict between Azerbaijan and Armenia over Nagorno-Karabakh.

Armenia played for time and time turned against it. On its way out of the territories it illegally occupied, in which it destroyed much of the Azerbaijani ancient cultural landmarks and desecrated Azerbaijani places of worship, it left an insidiously malevolent footprint: an untold number of landmines that have already killed and injured Azerbaijanis and Russian peacekeeper and could claim more human fatalities and cause body injuries to many.

The international community should now shoulder with Azerbaijan in its immense task to demine the liberated areas so that over a million forcibly displaced Azerbaijanis can finally return to their land and homes.

Good riddance to Armenia’s cards played wrong. Now the South Caucuses region is freer of Armenia’s malevolent, troublemaker, mischief. Now is the time for a peaceful coexistence in the entire South Caucasus region that Azerbaijan was seeking to achieve these past 30 years.