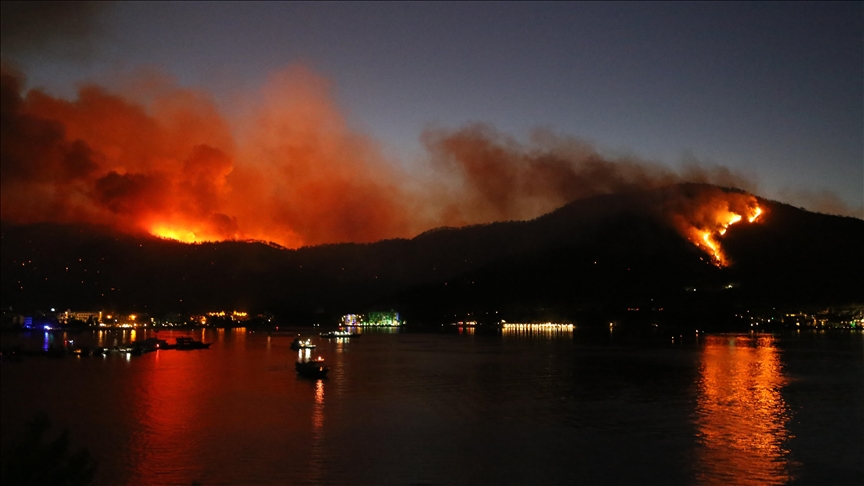 In Turkey's Mediterranean region and across the country, with a much harsher fire season than in previous years, the area burned this year has increased nearly nine-fold on average with the latest fires, according to an expert.

As of Friday morning, 196 of the 208 fires had been brought under control in Turkey, which has been battling numerous fires in recent days, Anadolu Agency reports.

According to a study by Istanbul University's Cerrahpasa Faculty of Forestry, fires have become a very serious threat to the entire Mediterranean basin, while large fires are becoming a part of life.

In 2017, more than half a million hectares burned in Portugal alone, killing 118 people, including civilians and firefighters.

Even countries traditionally considered not prone to wildfires have been hit hard.

Wildfire seasons in the Mediterranean have been prolonged in recent years -- starting earlier than expected and lasting longer -- with the number of fires and areas burning exceeding long-term averages.

This year, the situation is getting worse. A fire season is going on above average in the entire Mediterranean geography and much higher in Turkey.

He stressed that the disaster management process should be "data and knowledge-based," but also "transparent," that "involves volunteers," and those who work in the field, as well as the public who support them, should fully trust firefighting officers.

Climate change has a significant share in the rapid rise in forest fires, said Serengil.

“Also, the expansion of residential areas, the proximity of home and industrial units to ecosystems (natural ecosystems or natural habitats of plants and wild animals), rising demand, such as picnics, on the use of forestry areas due to the growing population, new roads and new infrastructure investments, like sub-surface and overhead electricity, natural gas, oil, in and near these areas increase the risk of fire.

“The risks posed by climate change and increased human activity near forests have also triggered fires," he said.

- Being aware of dangers

Ufuk Ozkan, another expert, also noted: "Many countries fighting fires have now begun to invest in preventive work due to the costs and risks posed by fire extinguishing.”

“The aim is to create fire-resistant forestry and settlements in/near forests, as well as measures to prevent and reduce the formation of fire,” he said.

“First, people's entry and exit to forests should be prevented or reduced during periods when the risk of wildfire is critical during the fire season.

“The second is forest management practices that prevent or complicate fires. Although these vary from region to region, forest roads, safety lanes, fire watchtowers and cameras are technical forestry applications that prevent fuel reduction or fire from reaching the peak point,” he said.

“The third important issue is the settlements in and near forests. The risk of fire in these settlements, such as sparks from roofs, and the risks of fire exposure should be minimized.

“Also, fire escape routes of wild animals and methods to direct wild animals to these routes should be included in the emergency plans. These should be added to the national fire prevention system, and updated and improved every year,” he underlined.

“So, being aware of the dangers of upcoming wildfires and detecting and responding to smoke in a timely manner is essential in preventing wildfires."

According to official figures, at least eight people have lost their lives since the fires started on July 28.