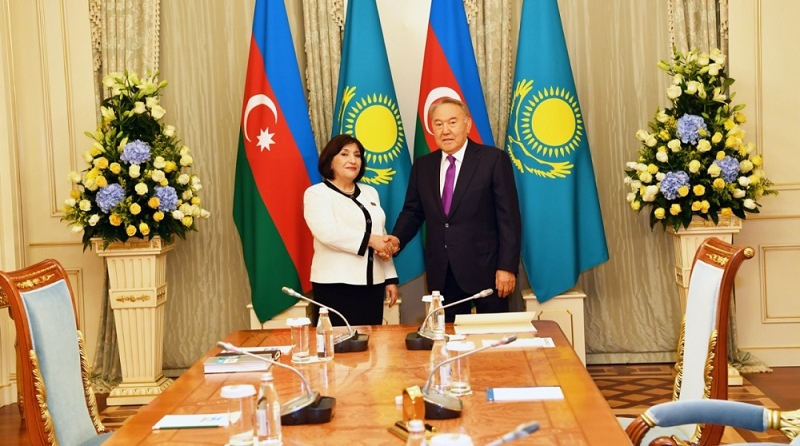 Azerbaijan’s victory in the Patriotic War is important both for the whole region and the Turkic World, First President of Kazakhstan-Elbasy Nursultan Nazarbayev said as he met with Speaker of Azerbaijani Parliament Sahiba Gafarova, News.Az reports.

Nazarbayev said that he closely followed the developments taking place in Azerbaijan.

Emphasizing the importance of Azerbaijan’s victory in the Patriotic War both for the whole region and for the Turkic World, Nazarbayev once again congratulated Azerbaijan on this victory. He shared his good memories of founder and architect of modern and independent Azerbaijan Heydar Aliyev.

“The foreign political course pursued by President Ilham Aliyev, the steps to ensure peace and stability in the region and the opening of transport corridors under the new realities had greatly enhanced the international reputation of Azerbaijan,” he mentioned.

Speaker Gafarova conveyed greetings and best wishes of President Ilham Aliyev to Elbasy Nursultan Nazarbayev and highlighted the friendship between Azerbaijan’s national leader Heydar Aliyev and the Kazakh President. Gafarova emphasized the undeniable services of these two great leaders in strengthening the bonds of brotherhood and mutual trust between the two nations.

“The people of Azerbaijan and Kazakhstan both had had to pass through difficult stages in their independence periods,” Speaker Gafarova said, adding that next year will mark the 30th anniversary of the establishment of diplomatic relations between the two countries.

She highlighted the significant role of the inter-parliamentary cooperation in broadening the bilateral ties and the import of the Co-operation Treaty between the Milli Majlis of Azerbaijan and the Mazhilis of the Parliament of Kazakhstan. “There are friendship groups in both legislatures; the two sides’ MPs co-operate affluently in the international organizations,” Gafarova said.

Gafarova highly appreciated Kazakhstan’s First President Nursultan Nazarbayev’s initiatives to unite the Turkic peoples. She highlighted the opportunities to reinforce the Azerbaijani-Kazakh relations and expand the mutually beneficial co-operation – the opportunities, that is, that are provided by the TurkPA, the TURKSOY and the Co-Operation Council of Turkic-Speaking Countries.

Speaking about the Patriotic War, Speaker Gafarova said that Azerbaijani Army led by Commander-in-Chief, President Ilham Aliyev had responded to Armenia adequately, restored the territorial integrity of the country and enforced the well-known resolutions of the UN Security Council. Noting that the trilateral statement signed on 10 November 2020 between the leaders of Azerbaijan, Russia and Armenia put an end to the conflict, Gafarova mentioned that the restoration and reconstruction work are underway in the territories that sometimes called the Hiroshima of the Caucasus.