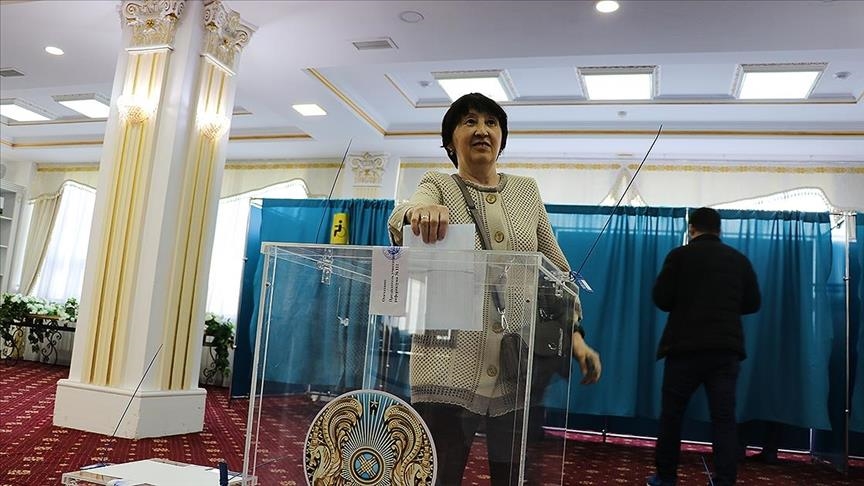 Kazakhstan’s Central Referendum Commission has announced the preliminary official results of the nationwide referendum on the adoption of amendments and additions to the country’s Constitution proposed earlier this year by the country’s President Kassym-Jomart Tokayev, News.Az reports citing the country's Foreign Ministry.

According to them, 77.18 % of the voters in the nationwide referendum on 5 June approved the proposed amendments, paving the way for changing 33, or one third articles of the document initially adopted in 1995. The reforms were promoted as tilting significantly the checks and balances in the Kazakh political structure away from a super-presidential system by strengthening competences of the Parliament and local authorities, as well as the human rights protection mechanisms.

Announcing the preliminary official results of the vote based on the electronic copies of protocols received from all territorial commissions for the referendum, Nurlan Abdirov, Chairman of the Central Referendum Commission, said: “Calculation of ballots cast in all of 10,012 polling stations that were operating across the country and abroad have now been completed. According to the law, the referendum is considered valid, if more than 50% of the citizens eligible to vote have done so in more than two thirds of the country’s regions. Out of 11,734,642 citizens eligible to vote, 7,986,293 are considered to have cast their ballot, [meaning] a turnout of 68.06%... Thus, the referendum can be considered valid… The [share] of citizens to have answered “Yes” to the question asked at the referendum made 77.18%, or 6,163,863 citizens, an absolute majority in each region of the country. Thus, the law’s conditions have been met,” he said.

At the same time, 18.66% of voters answered “No”, while further 4.16% of the ballots cast were recognised invalid.

Commenting on the significance of nation voting in favour of the amendments to the Constitution, Mukhtar Tileuberdi, Deputy Prime Minister – Minister of Foreign Affairs of Kazakhstan, said: “The referendum was a historic moment for Kazakhstan. The approved amendments to the Constitution mean a new phase in the development of our statehood as they clearly aim at strengthening the human rights protection mechanisms and the democratic institutions in Kazakhstan.”

According to the Minister, “These changes will result in greater competition in the political system of our country and expanded citizen participation in state governance. One important change will be the ultimate, unequivocal ban on the death penalty, to be clearly written down in the renewed Constitution, in line with our commitment according to the Second Optional Protocol to the 1966 Covenant on Civil and Political Reforms that our Parliament ratified last year.”

Minister Tileuberdi further stressed: “We welcome the high voter turnout and the decision of our compatriots to support these reforms, which will positively impact the lives of every citizen. We are also grateful to numerous domestic and foreign observers for monitoring the referendum, which helped us in conducting it in a fair and transparent manner in line with democratic standards and principles. Therefore, we see this as a clear support from the international community for this referendum and President Tokayev’s reform agenda. Indeed, this is just the first step towards building a New Kazakhstan. Significant work lies ahead to implement the amendments at the constitutional and legislative level, and we look forward to working with all our partners as we enter a new chapter in Kazakhstan’s modern history.”

As noted previously, the approved amendments will impact one third of the Constitution (33 articles). Their implementation will facilitate a comprehensive transformation of the entire state model of Kazakhstan, including the transition from a “super-presidential” form of government to a presidential republic with an influential parliament and an accountable government. In addition, the powers of the President will be reduced, the role of the parliament and local authorities will be significantly strengthened, and the mechanisms for the protection of human rights reinforced, including by re-establishing the Constitutional Court and giving a constitutional mandate to the Commissioner for Human Rights.

Earlier, Kazakhstan’s President Kassym-Jomart Tokayev stated the main goal of the constitutional reform is “the democratisation of the country and expanding the opportunities for people to participate in governance.”