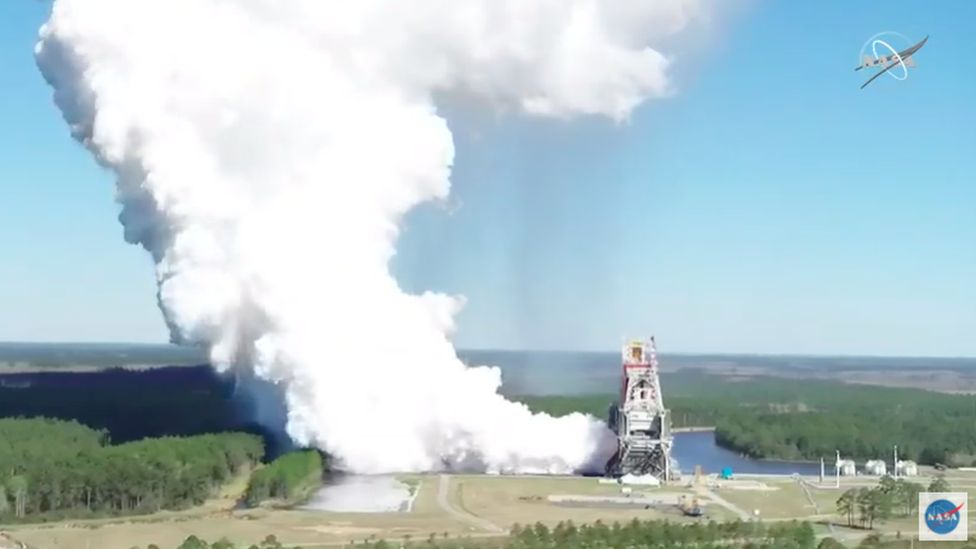 Nasa has carried out a successful test on part of the most powerful rocket in existence - the Space Launch System (SLS), BBC reports.

Its engines were kept running for more than eight minutes - to simulate the time that it takes the rocket to get from the ground into space.

It's the second such test for the biggest segment of the SLS, after an attempt in January shut down early.

The SLS is to send humans to the lunar surface for the first time since 1972.

The mission is part of Nasa's Artemis project, launched by the Trump administration in 2017.

The test was carried out on the rocket's core stage. The SLS consists of the orange core, with its four powerful RS-25 engines, and two boosters attached to the sides. The RS-25s, built by California-based Aerojet Rocketdyne, are much the same engines that powered the space shuttle.

Although the target was to fire the engines for eight minutes, teams from Nasa and prime contractor Boeing only had to keep them on for 250 seconds (four minutes) in order to gather all the engineering data they needed.

The chair of the US House Committee on Science, Space and Technology congratulated Nasa on the successful test. Texas democrat Eddie Bernice Johnson said: "Achieving this significant milestone is a story of tenacity and dedication."

She added: "Today's successful test brings us one step closer to returning American astronauts to the Moon in preparation for the human exploration of Mars."

The core that was part of Thursday's test will be used for the maiden flight of the SLS - currently scheduled for late 2021.

It is attached to a giant structure called the B-2 test stand, on the grounds of Nasa's Stennis Space Center, near Bay St Louis, Mississippi.

In the 1960s, the stand tested engines used in the massive Saturn V rocket that launched the Apollo astronauts to the Moon.