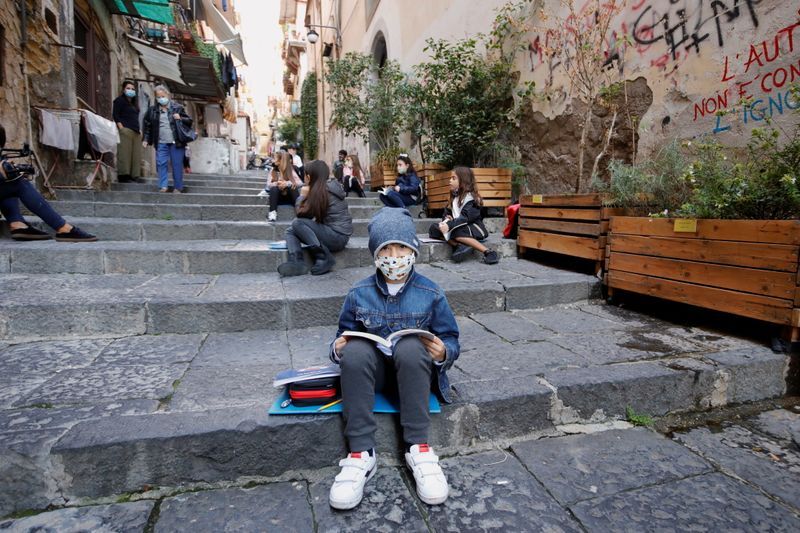 Since schools in the southern Italian region of Campania closed due to a surge in COVID-19 cases, teachers have been taking their classes to the streets to prevent students from falling behind.

Campania, around Naples, escaped largely unscathed from Italy’s first coronavirus wave in the spring, but the region has seen infections soar in recent weeks and local authorities have closed most schools until the end of October.

“Mothers called me and said the kids are in floods of tears, they want to go back to school, they don’t understand why schools need to be stopped,” said Pamela Buda, while holding a class for pupils sitting on public steps in central Naples.

Tonino Stornaiuolo yells out his lessons to pupils listening from their balconies and on the streets outside their homes.

“We do everything to respect the rules because I think this emergency in Italy is serious and real,” Stornaiuolo said.

The government has so far avoided imposing nationwide curbs on schools, businesses, and freedom of movement, but has urged regional authorities to draw up their own restrictions if needed.

Lombardy, where Milan is located, has already introduced a curfew from 11 p.m. to 5.00 a.m. to put a stop to late night gatherings. Campania has said it will follow suit. [nL8N2HB5ZV]

“I wanted to find a way in which the kids could see us and share time with us, at least as long as it is possible and until we know whether there will be another lockdown,” Stornaiuolo added.