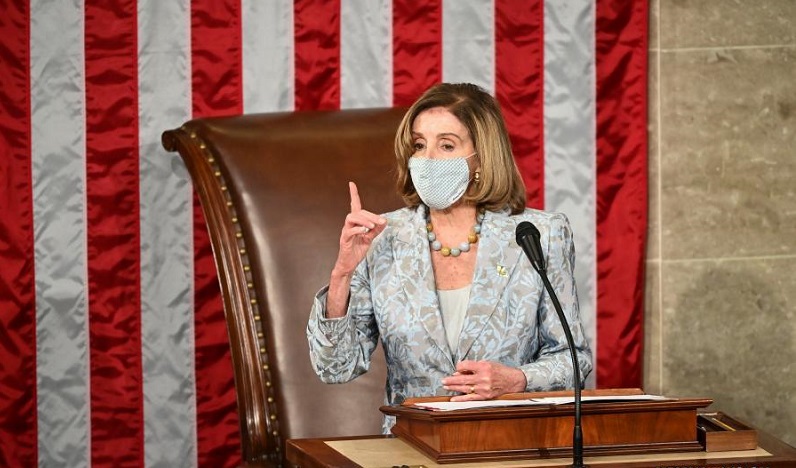 Democratic Congresswoman Nancy Pelosi of California was reelected on Sunday as speaker of the U.S. House of Representatives, where her party has a narrow majority.

Pelosi received support from 216 Democrats, with two of her colleagues voting for someone else and three others voting present.

Kevin McCarthy, also from California, received all votes from the 209 Republicans present, allowing him to continue serving as minority leader.

A veteran legislator who has served in the U.S. Congress since 1987, Pelosi was elected the first woman to serve as House speaker in 2007. She returned to the role in 2019 after her party regained control of the chamber.

The speaker is the political and parliamentary leader of the U.S. House.

During the past two years, the White House and the Pelosi-led House had a strained relationship.

The chamber impeached U.S. President Donald Trump in late 2019 after an inquiry triggered by a whistleblower complaint that raised concerns about the White House's interactions with Ukraine. The Republican-led Senate later acquitted the president.

Pelosi's election as House speaker came as the 117th U.S. Congress was sworn in on Sunday.

In a letter to her colleagues in the morning, Pelosi said the new Congress convenes "during a time of extraordinary difficulty."

"Each of our communities has been drastically affected by the pandemic and economic crisis: 350,000 tragic deaths, over 20 million infections, millions without jobs -- a toll almost beyond comprehension," she said.

The balance of power in the 100-seat Senate will not be clear until after next week's Senate runoffs in the southeastern state of Georgia.

The new Congress will convene in a joint session on Wednesday to formally count the votes cast by the Electoral College in the 2020 presidential race - 306 for Democrat Joe Biden and 232 for Trump, the Republican incumbent.

A group of Republicans has announced they will contest the Electoral College results but their planned moves will unlike overturn Biden's victory over Trump, who hasn't conceded and is still pushing for claims of massive election fraud.