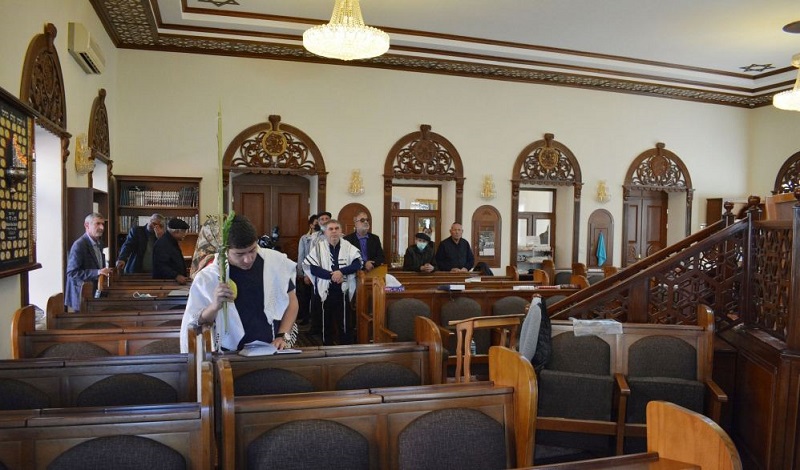 Mountain Jews living in Azerbaijan’s Guba district commemorated Azerbaijani martyrs, who gave their lives for the independence and territorial integrity of the country.

On September 27 - the Day of Remembrance, a ceremony of commemoration of the martyrs was held in the Giyalki synagogue in Krasnaya Sloboda village.

Representatives of the religious community of Mountain Jews read prayers for the repose of the souls of martyrs and honored their memory.

The event participants noted that Azerbaijan achieved a brilliant victory in the 44-day Second Karabakh War [from late Sept. to early Nov.2020], putting an end to the Armenian occupation.

Telman Mukhaylov, a representative of the head of the Executive Power of the Guba district in the Krasnaya Sloboda administrative-territorial unit, noted that during the Second Karabakh War, the Azerbaijani people, including representatives of all nationalities, closely united around Supreme Commander-in-Chief of the Armed Forces Ilham Aliyev, and fought to liberate Azerbaijani territories from Armenian occupation.

"Mountain Jews are always ready to fight and give their lives in the name of their native Azerbaijan. Back in the First Karabakh war [in 1990s], ethnic Jew - National Hero of Azerbaijan Albert Agarunov, heroically fighting for the liberation of Azerbaijani lands, became a martyr. During the Second Karabakh War, his followers showed heroism, defeating Armenian Armed Forces," added Mukhaylov.