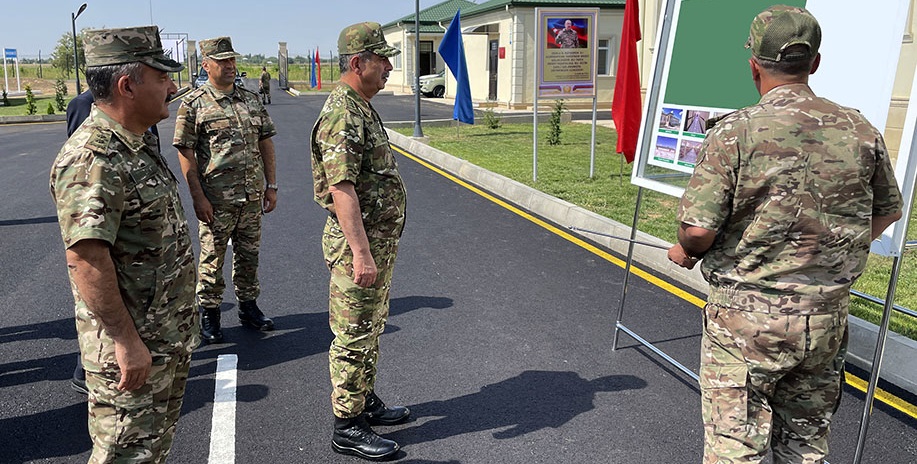 According to the order of the President of the Republic of Azerbaijan, the Supreme Commander-in-Chief of the Armed Forces, Mr. Ilham Aliyev, activities on the provision of the Azerbaijan Army Units stationed in the liberated territories, organization of troops' service, and improvement of social and living conditions continue, News.az reports citing the Ministry of Defence.

The headquarters, canteen, medical point, soldiers' barracks, car parking, warehouses for various purposes, and other infrastructure facilities in the territory of the military camp, built to organize combat training and troops' service at a high level, as well as provide living conditions for military personnel, were inspected.

It was reported to the Minister of Defense that all office premises are equipped with air conditioners, furniture, modern sanitary facilities, bedding, kitchen equipment, and generators.

After the inspection of the military unit, the Minister of Defense gave relevant instructions on further improving the service and living conditions of the military personnel.

Then a concert program was organized for the military personnel on the occasion of the holiday of Gurban Bayram.

Speaking in front of the military personnel, Colonel General Z.Hasanov emphasized that at the opening of the new commando military unit in the Kalbajar region the Supreme Commander-in-Chief once again highly appreciated the activities of the Azerbaijan Army. Noting the importance of worthy fulfillment of all assigned tasks to justify the trust placed by the country's leadership, the Minister congratulated the military personnel on the commissioning of the new military unit and the holiday of Gurban Bayram, as well as wished them success in their military service.

This year, as in previous years, a sacrificial ceremony was held.

In the end, the Minister of Defense, Colonel General Z.Hasanov, and the Head of the Executive Power of the Khojavand region E.Huseynov planted evergreen long-lived trees in the territory of the military unit as a sign of the unity of the army and the people.