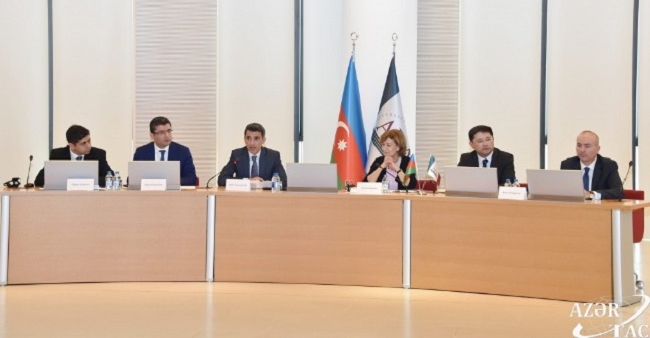 On April 26, ADA University hosted a round table titled “The rise of disinformation: impact on media landscape and effective policy responses.”

The event, organized by the Media Development Agency of the Republic of Azerbaijan (MEDIA), focused on the problems in the media in modern times, the negative effects of rising disinformation and steps to combat disinformation, News.Az reports.

Executive Director of MEDIA Ahmad Ismayilov, OSCE Representative on Freedom of the Media Teresa Ribeiro, as well as heads of a number of leading media outlets in Azerbaijan, took part in the event moderated by ADA University Vice-Rector Fariz Ismayilzade.

The OSCE representative said media problems and the issue of disinformation are relevant in a complex time of rapid development of science and technology. Ribeiro noted that the use of smartphones is leading to the spread of misinformation, and this, of course, creates insecurity in people.

She stressed that there can be no security without media freedom. “Conveying information to the public in a detailed, objective and impartial manner is a key factor in professional journalism. Transparency and confidence in the media must be ensured in the fight against disinformation,” the OSCE representative added.

Speaking at the event, Executive Director of MEDIA Ahmad Ismayilov said a new law “On the media” was recently adopted in Azerbaijan. He noted that the new law contains important provisions on copyright protection.

Ismayilov stressed that ensuring the rights of the media, freedom of opinion and speech, and creating equal opportunities are important factors.

“The new law is a guarantor of freedom of speech, freedom of opinion, pluralism, normalization of relations between the media and the public, in short, the creation of a favorable environment for the media,” he added.

Other speakers at the event emphasized the media’s important role in shaping public relations and building an information society.