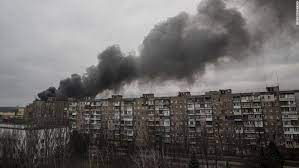 The city council of the southern Ukrainian city of Mariupol has posted video of a devastated maternity hospital in the city and accused Russian forces of dropping several bombs on it from the air, News.az reports.

"The destruction is enormous. The building of the medical facility where the children were treated recently is completely destroyed. Information on casualties is being clarified," the council said.

"A maternity hospital in the city center, a children’s ward and department of internal medicine ... all these were destroyed during the Russian air strike on Mariupol. Just now," said Pavlo Kyrylenko, head of the Donetsk regional administration.