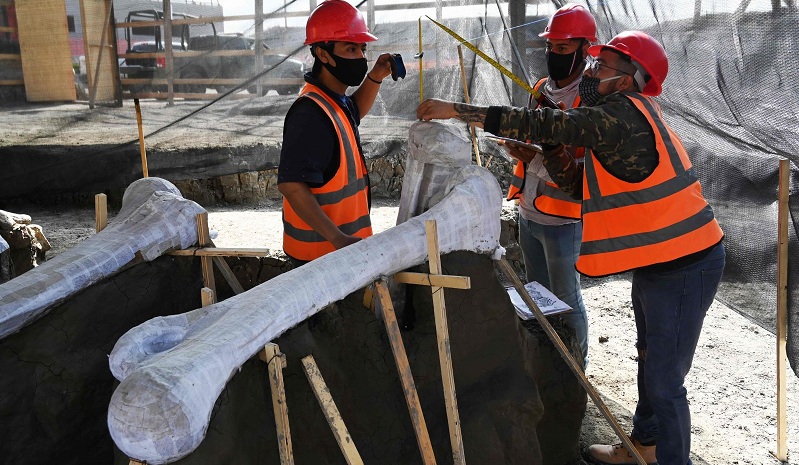 Amid busy construction crews racing to build an airport in Mexico, scientists are unearthing more and more mammoth skeletons in what has quickly become one of the world's biggest concentrations of the now-extinct relative of modern elephants.

More than 100 mammoth skeletons have been identified spread across nearly 200 excavation sites, along with a mix of other Ice Age mammals, in the area destined to become the Mexican capital's new commercial airport, according to Reuters.

Lead archeologist Ruben Manzanilla explained on Tuesday that around 24,000 years ago mammoth herds reached this spot where sprawling grasslands and lakes would have enticed them to reside.

"This place was like a paradise," he told Reuters, noting that as the last glaciers melted a wide range of mammals – including ancient species of camels, horses and buffalo – lived along what would have been an extremely muddy shoreline.

"Then over many years the same story repeated itself: The animals ventured too far, got trapped and couldn't get their legs out of the muck," said Manzanilla.

He speculates that most of the mammoths died this way, though he adds that there is some evidence that around 10,000 years ago early humans may have also hunted the 20-tonne beasts with flint arrows and spears, or dug rudimentary shallow water pits to snare them.

But the sheer amount of bones, including long, curling tusks – technically the animal's front two teeth – have come as a shock.

"We had the idea that we'd find mammoth remains, but not this many," he said.

Once the excavations are finished, Manzanilla said the site, located about 30 miles (50km) north of downtown Mexico City, could rival others in the United States and Siberia as the planet's biggest deposit of mammoth skeletons.

He noted that a museum-style mammoth exhibit is being planned for the airport's main terminal.

The series of interconnected lakes that once covered the Valley of Mexico were deliberately drained by Spanish colonial masters beginning in the 1600s in an effort to tame annual flooding.

Today, the mostly dry landscape is dominated by the working-class neighborhoods and highways that spill out from Mexico City.