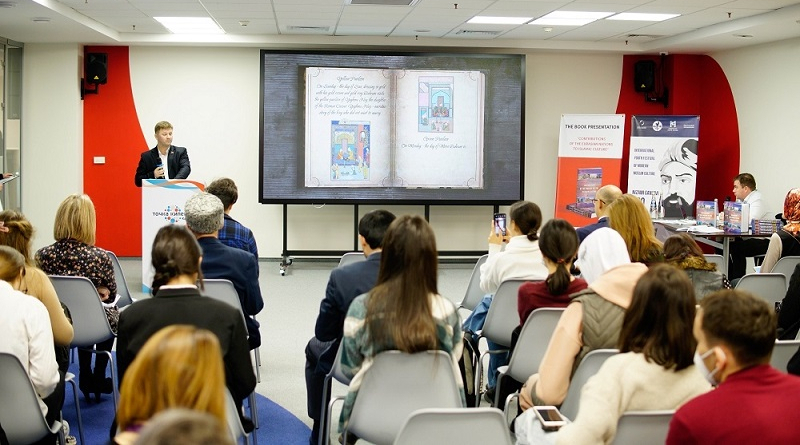 The Eurasian Regional Center of Islamic Cooperation Youth Forum (ICYF-ERC) has organized an event dedicated to the 880th anniversary of great Azerbaijani poet and thinker Nizami Ganjavi in the capital city of the Republic of Tatarstan.

The event was held on the sidelines of the International Youth Festival of Modern Muslim Culture organized by the Ministry of Youth Affairs of Tatarstan and "Selet" Youth Center (Republic of Tatarstan) in partnership with Islamic Cooperation Youth Forum and its Eurasian Regional Center as well as other organizations.

Addressing the opening ceremony, which was held in a hybrid format, Acting Director General of the ICYF-ERC Vusal Gurbanov, Director of Tatarstan Youth Center “Selet” Aygul Gabdrrahmanova and Representative of Federal Agency on Youth Affairs of Russian Federation Sergey Orlov emphasized the successful cooperation between the organizations, noting the necessity of studying Nizami Ganjavi heritage by organizing such events.

The participants had an opportunity to share their views during the debates covering such topics as “Nizami’s poems in the context of intercivilizational relations” by Emin Ramazanov, leader of international project “Salam Tatarstan”, “Shihabeddin Marjani’s place in the Tatar’s culture” by Askar Gatin, Senior Adviser of Department on Religious Organizations of President’s Administration of the Republic of Tatarstan, “Example of Nizami – role of culture in the enlightening of youth” by Ilgar Fahmi, writer, playwright and Secretary of Azerbaijan’s Writers Union.

The event was attended by about one hundred students, scientists, experts, as well as prominent public and political figures of Indonesia.

This is the sixth international event, organized by the ICYF-ERC to mark the 880th anniversary of Nizami Ganjavi.