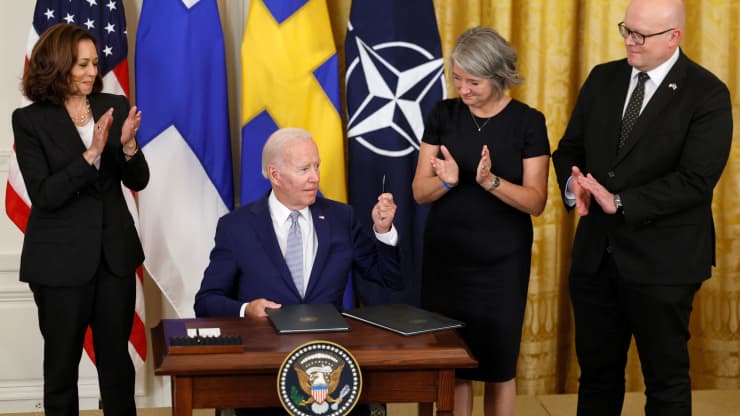 ″[Russian President Vladimir] Putin thought he could break us apart,” Biden said from the East Room of the White House. “Our alliance is closer than ever, it is more united than ever, and after Finland and Sweden join we will be stronger than ever.”

Last week, the Senate voted 95 to 1 to ratify the entrance of Finland and Sweden into the world’s most powerful military alliance.

In May, both nations began the formal process of applying to NATO amid the backdrop of Russia’s war in Ukraine. Moscow, long wary of NATO expansion, has opposed the two nations’ plans to join the alliance.

Both Finland and Sweden already meet many of the requirements to be NATO members. Some of the requirements include having a functioning democratic political system, a willingness to provide economic transparency and the ability to make military contributions to NATO missions.

“They will meet every NATO requirement, we are confident of that,” Biden said before signing the documents.

Earlier this year, Biden welcomed leaders from both countries to the White House and pledged to work with the Senate — which has to sign off on U.S. approval of NATO bids — and the other 29 members of the alliance to swiftly bring Sweden and Finland into the group.

At the time Biden, flanked by Finnish President Sauli Niinisto and Swedish Prime Minister Magdalena Andersson, said the two countries would “make NATO stronger.” He called their moves to join the pact a “victory for democracy.”

After Biden’s signature, the governments of the Czech Republic, Greece, Hungary, Portugal, Slovakia, Spain and Turkey will still need to sign the instruments of ratification.

“I urge the remaining allies to complete the ratification process as quickly as possible,” Biden said, a development that must occur by the end of September. “The United States is committed to the transatlantic alliance. We are going to write the future we want to see.”

In June, NATO Secretary General Jens Stoltenberg said the leaders of the alliance had reached a deal to admit Finland and Sweden after resolving the concerns of holdout Turkey.

During a NATO summit in Madrid, the foreign ministers of Finland, Sweden and Turkey signed a memorandum to confirm that Turkey will back the new NATO bids.