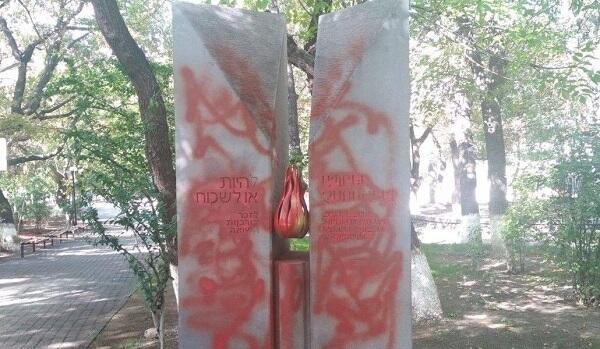 News.Az presents the article by Rachel Avraham, a senior media research analyst at the Center for Near East Policy Research and a correspondent for the Israel Resource News Agency.

Recently, it was reported that the “To Live and Not Forget” Holocaust Memorial in Yerevan, Armenia was vandalized by local anti-Semites, who sprayed over the Hebrew inscriptions on the monument.  The World Jewish Congress condemned the anti-Semitic vandalism: “It is horrible to see that the Holocaust memorial in Yerevan, Armenia was vandalized with vile anti-Semitic graffiti.  The vandalism was condemned by the city’s mayor.”

Rabbi Zamir Isayev also tweeted: “What a disgrace!  A monument to the victims of the Holocaust was once again desecrated in Yerevan.  How can the Armenians justify the desecration of a Holocaust memorial by the fact that Israel sold weapons to Azerbaijan?  Does this give someone the right to desecrate the memorial?”

Following these developments, Arye Gut, who heads the Azerbaijan House in Israel, noted that “fascism and neo-Nazism have long been the state ideology of Armenia,” adding that this was not the first time that the Holocaust Memorial in Yerevan was vandalized: “The popularization of fascism, antisemitism and neo-Nazis has become an integral part of Armenia’s state policy. What is even more outrageous is that the fascist ideology called ‘Nzhdehism’ is included in Armenia’s educational institutions’ curriculum and generations are brought up on these ‘values.’”

Furthermore, he emphasized that Armenia also erected five years ago a monument in honor of the Nazi accomplice Garegin Nzhdeh: “A sovereign nation has the right to memorialize whoever they wish as their national heroes.  However, we should not be silent whenever a Nazi who perpetrated crimes during the Holocaust becomes some nations revered hero.  The Jewish people will never forget the acts of cruelty committed by the 20,000 Armenian legionnaires led by Nzhdeh during World War II.”

“The purpose of the Armenian Legion, led by Nzhdeh, was to raid the homes and destroy the lives of Jews, as well as others ‘objectionable’ to the Nazi German army,” he added.  “It was ‘thanks’ to the Armenian Legion that the towns of Simferopol, Yevpatoria, Alushta, Kerch, and Feodosia, as well as other areas of Western Crimea, were completely expunged of Jews.  It is therefore required of us not to be indifferent to the way modern Armenia elevates past figures who were clearly fascist and anti-Semitic to the rank of national heroes.”

“Perpetuating the memory of an Armenian fascist and anti-Semite is a shame and an insult to the memory of the Holocaust,” he added.  “My grandfather lost all his family members to the Nazis in Ukraine.  He survived only because he was away fighting against the Nazis with the Soviet Red Army.  Due to this, he was not there to protect his family. For me personally, this vandalism causes unbearable mental anguish.”

Israel’s Ministry of Diaspora Affairs just published its 2020 Annual Report, which noted an alarming increase in anti-Semitism following the Second Karabakh War: “Official attacks accelerated into anti-religious attacks and claims that the Jewish people historically committed crimes against the Armenian people.  The war in Karabakh led to extremist incidents, significant expressions of new anti-Semitism and disproportional attacks upon the State of Israel.  Media reports that Israel provided weapons to Azerbaijan caused much anger among the Armenian population and there were demonstrations where participants chanted anti-Semitic slogans.  Holocaust-era motifs were utilized.  The Armenian Prime Minister accused Israel of supporting genocide.”

Gut believes that the rising anti-Semitism in Armenia predated the Second Karabakh War and that the Armenians are just using Israel’s weapons sales as an excuse, for the Armenians did not react this way towards Russian and American arms sales to Azerbaijan: “Nobody has forgotten how the Yerevan House of Writers presented The National System by Roman Episkoposyan in Russian and Armenian.  In this book, the Turks are portrayed as the ‘murder nation’ and the Jews as the ‘destroyer nation.’  In the chapter on the ‘Greatest Falsification of the Twentieth Century,’ the author declares ‘the Holocaust is a myth.’”

Rabbi Israel Barouk wrote in Khojaly: A Crime against Humanity: “In the aftermath of survival, in the face of efforts to revise and deny the most gruesome tragedy in human history, Jewish communities across the world know that our lives depend on ‘Never Again’ to hold true now more than ever before.   We live through the remnants of the Holocaust and for a day to come where the world will really prevent a genocide before it happens.”

Considering this, one must note that a bigoted perception of the other in Armenia not only leads to incidents like the above but also led to the Khojaly genocide in 1992.  As a result of the barbaric atrocities that the Armenian armed forces perpetrated in Khojaly, 613 people were massacred, and 487 others were severely wounded.  Eight families were exterminated, 25 children lost both parents and 150 children lost one parent.  Moreover, 1,275 innocent people were taken hostage and the fate of 150 people remains unknown to date.  Civilians were shot at close range, scalped, and burned alive.  The women, children and elderly were subjected to unprecedented torture, abuse, and humiliation.  Many women and girls were raped.  They were treated in this manner merely because they were Azerbaijanis.  This is a crime against humanity.

Former Armenian President Serzh Sargsyan told British journalist Thomas de Wall 29 years ago: “Before Khojaly, the Azerbaijanis thought that they were joking with us.  They thought that the Armenians were a people who could not raise their hands against the civilian population.  We needed to put a stop to that.  And that’s what happened.”  Gut stressed, “It is impossible to imagine international acceptance for prominent Nazi war criminals, especially those who bragged about their crimes as respectable politicians.  Shouldn’t the perpetrators of Khojaly be held to the same standard?”

In contrast, religious tolerance, pluralism, and multiculturalism is official state policy in Azerbaijan.  Israel’s Ministry of Diaspora Affairs 2020 Report on Anti-Semitism did not cite a single anti-Semitic incident that took place in Azerbaijan over the past year, even though the pandemic has increased anti-Semitism in nations across the globe.  To the contrary, following their victory in the Second Karabakh War, Azerbaijanis waved Israeli flags proudly across their nation.  Aside from the Kurds, no other Muslim people has waved Israeli flags as much as Azerbaijanis have.

In conclusion, Gut proclaimed: “Modern Armenia’s policy is a ticking time bomb: Young people who grow up on such ideology will continue to live according to fascism’s creed.  Armenia’s state policy displays extreme disrespect for the millions of people who died fighting fascism in World War II, insulting their relatives and surviving veterans, especially the citizens of the former USSR who fought with exceptional merit to defeat fascism.  Today, Israel hardly needs partners or allies like Armenia.”