Jewish Journal: CNN should not endorse occupation and crimes against humanity 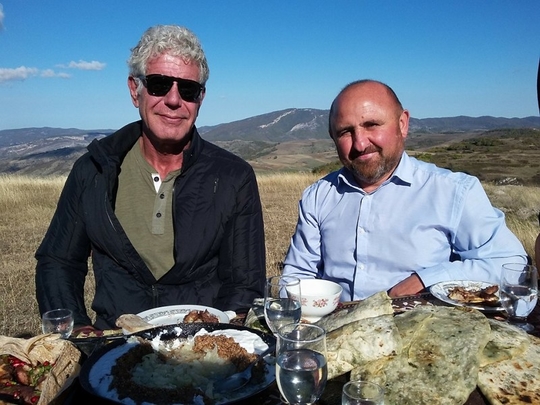 News.Az reprints from Jewish Journal an article by Durdane Agayeva. Durdane Aghayeva is a Muslim woman from Azerbaijan with a special connection to Jewish communities across the world, particularly here in Los Angeles. Durdane is a survivor of torture and a passionate advocate for peace. She works tirelessly for the empowerment of all survivors, to help others to find strength and healing through the unifying process of sharing.

I like CNN. Especially its coverage of international affairs has been providing audiences around the globe with much needed information in order to clearly understand what is going on in our globe today.

Last week however I was appalled and deeply disappointed to see Anthony Bourdain, one of my favorite celebrity chefs, drink vodka and eat pilaf in Shusha, the ancient capital of Azerbaijan’s Karabakh region. So you may ask what is wrong for a celebrity chef to drink, eat and get familiarized with foreign cuisines? After all it is his profession. The problem is that the region of Karabakh Mr. Bourdain has illegally visited is currently occupied by Armenia and has been made totally Azerbaijani-free since over 25 years. The very city of Shusha he visited had 100% Azerbaijani population before its invasion in 1992. All of those Azerbaijanis were either killed or expelled when the Armenian army invaded the city. Such a high profile visit to an occupied and ethnically cleansed region gives an incredible PR opportunity to those who committed these crimes to whitewash them. I think any self-respecting reporter and TV station should be mindful of such grave implications.

As a survivor of the Khojaly massacre that was committed against Azerbaijani civilians by Armenia in 1992 in the town of Khojaly, not far from Shusha that Mr Bourdain visited, and as someone who underwent terrible tortures in the Armenian captivity as a 20 year old girl, I was asked by other women survivors of Khojaly to bring their open letter to the attention of CNN and Mr Bourdain personally. I hope this letter will lead CNN and its celebrity chef to be henceforth more attentive to the plight of over 1 million Azerbaijani refugees – victims of illegal occupation and pure ethnic cleansing. Here is the letter:

We are writing to you as mothers, sisters and daughters, who survived one of the most horrific war crimes of the 20th century, the destruction of the town of Khojaly in Azerbaijan.

War crimes, ethnic cleansing, indiscriminate violence against civilians have been an integral part of the ongoing aggression of Armenia against the Republic of Azerbaijan.

During the active phase of the war in 1991-94, the attack on the town of Khojaly was especially brutal and tragic. Before the conflict, we, survivors of this massacre, and other 7,000 people lived peacefully in Khojaly in the Nagorno-Karabakh region of Azerbaijan. From October 1991, the town was entirely surrounded by the armed forces of Armenia. In the early hours of February 26, 1992, following massive artillery bombardment of Khojaly, the assault was launched from various directions. As a result, the Armenian armed forces, with the help of the motorized infantry regiment No. 366 of the former Soviet Army still stationed in the area, seized Khojaly. Invaders destroyed Khojaly with special brutality and completely exterminated its civilian population. Atrocities by Armenian troops included scalping, beheading, bayoneting of pregnant women and mutilation of bodies. Even children were not spared. As a result, 613 civilians were killed, including 106 women, 63 children and 70 elderly. Another 1,000 people were wounded and 1,275 taken hostage. To this day, 150 people from Khojaly remain missing. The intentional slaughter of the civilians in Khojaly town was directed at their mass extermination based on racial discrimination.

In a cynical admission of culpability, Armenia’s then-Defense Minister and current President, Serzh Sargsyan, was quoted by the British journalist Thomas de Waal, as saying, “[b]efore Khojali, the Azerbaijanis thought that … the Armenians were people who could not raise their hand against the civilian population. We were able to break that [stereotype]” (Thomas de Waal, Black Garden: Armenia and Azerbaijan through Peace and War (New York and London, New York University Press, 2003), p. 172)).

Indeed, Khojaly was chosen as a stage for further occupation and ethnic cleansing of Azerbaijani territories. As a result of war unleashed by Armenia against Azerbaijan, some 20 percent of Azerbaijan’s internationally recognized territory is currently occupied. In violation of international humanitarian law, Armenia carried out ethnic cleansing policy against almost one million Azerbaijani civilians in the occupied territories of Azerbaijan and in Armenia itself. It left Azerbaijan with one of the largest internally displaced population per capita in the world.

We do respect your professionalism and your programs about international cuisine. In the times of peace, such culinary exchanges bring peoples together. But in the context of ongoing war and brutality, such a cultural program sends an unintended message of endorsing the ethnic cleansing and annexation by force to victims of war crimes, like ourselves, who have lost their loved ones and native homes. Please also understand that we are even deprived from the opportunity to visit graveyards of our parents and loved ones left in the occupied territories. For over 25 years, we live with the hope of returning to our native lands, rebuilding our homes and making traditional Azerbaijani shila pilaf for our children, like the dish you have been served in destroyed and depopulated Azerbaijani town of Shusha.

Admittedly, your visit to the occupied territories of Azerbaijan on a military helicopter and preparations to make culinary show right next to Khojaly, where crime against humanity committed, have seriously disappointed us and added insult to our injuries. We would like to believe that you have been misled about the realities on the ground and your visit to the occupied territories of Azerbaijan was not intentional. After all, it is hard to imagine you enjoying German food at the site of a Nazi concentration camp or enjoying a lunch with Bosnian Serb militants while they were in control of the mass murder site in Srebrenica.

Armenia’s illegal, violent and protracted occupation of Azerbaijani land, including our native Khojaly, harmed Armenia’s own people, its economy and its future. This is because our Armenian neighbors, with whom we lived in peace for centuries and hope to build a peaceful region together, need to understand that one cannot build happiness on the tragedy of others.

Endorsing and thus prolonging the occupation and this war, helps nobody other than those who profit from this tragedy. Instead, we need to help the two nations find ways to come to peace and promote the international peace-making efforts.

We urge to take into account sensitive nature of the situation and the suffering so many of us have lived through. We also appeal to you to reconsider your decision to include the segment from the occupied and ethnically cleansed territories of Azerbaijan in your show.

We are looking forward to your understanding and cooperation.