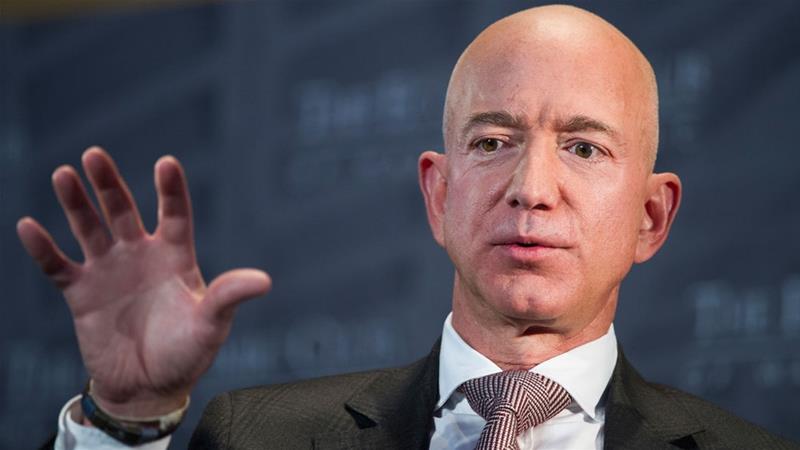 Jeff Bezos’s net worth has smashed through its previous peak, even after he relinquished a quarter of his stake in Amazon.com Inc. as part of a divorce settlement last year, Bloomberg reports.

Shares of the Seattle-based retailer surged 4.4% to a record $2,878.70 Wednesday, boosting the founder’s world-leading fortune to $171.6 billion. That tops his previous high of $167.7 billion, set on Sept. 4, 2018, according to the Bloomberg Billionaires Index.

His gains -- $56.7 billion this year alone -- underscore a widening wealth gap in the U.S. during the worst economic downturn since the Great Depression. Initial public offerings and buoyant equity markets have bolstered mega-fortunes, even as tens of millions of people have lost their jobs. This week, after receiving complaints about ending pandemic hazard pay, Amazon said it would spend about $500 million to give one-time $500 bonuses to most front-line workers.

The company declined to comment on its founder’s wealth.

Amazon has been on a tear, with the pandemic accelerating the consumer shift to e-commerce from brick-and-mortar retail. Bezos owns 11% of the stock, which comprises the bulk of his fortune.

Most of those with the biggest wealth gains also hail from the tech sector. They include Tesla Inc. Chief Executive Officer Elon Musk, who added $25.8 billion to his fortune since Jan. 1, and Zoom Video Communications Inc. founder Eric Yuan, whose wealth has almost quadrupled to $13.1 billion.

Mackenzie Bezos, who acquired a 4% stake in Amazon after the couple split, has a net worth of $56.9 billion and climbed to No. 12 in Bloomberg’s ranking. She recently leapfrogged Alice Walton and Julia Flesher Koch to become the world’s second-wealthiest woman, and now trails only L’Oreal heiress Francoise Bettencourt Meyers.

Not every billionaire has come out ahead this year. Spain’s Amancio Ortega, the titan behind the Zara fast-fashion brand, has lost $19.2 billion, the most of anyone on the Bloomberg index. Berkshire Hathaway Inc. Chairman Warren Buffett has dropped $19 billion and French luxury-goods tycoon Bernard Arnault is down $17.6 billion.

But most have weathered the downturn. The collective net worth of the world’s 500 richest people now stands at $5.93 trillion, compared with $5.91 trillion at the beginning of the year.