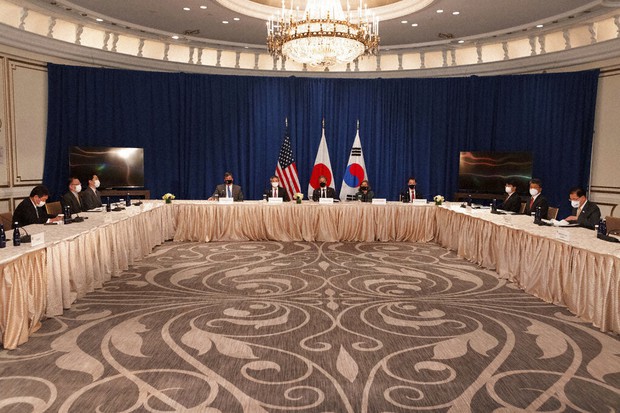 Japanese Foreign Minister Toshimitsu Motegi said Wednesday he and his counterparts from the United States and South Korea agreed to further strengthen cooperation to rid North Korea of its nuclear and missile program, according to Kyodo News .

During talks in New York held on the fringes of the U.N. General Assembly sessions, the three pledged to work closely toward complete denuclearization of North Korea by boosting diplomatic efforts, ensuring the implementation of U.N. resolutions barring Pyongyang from developing ballistic missiles and nuclear weapons, and enhancing deterrence in the region.

The three last met in person in May on the sidelines of the Group of Seven foreign ministerial meeting in London, which South Korea attended as a guest.

They also discussed other regional and global issues such as Myanmar, China and climate change, and agreed to deepen cooperation on these areas as well, Motegi said.

The U.S. administration of President Joe Biden has been emphasizing the importance of cooperation between the three nations despite the strained relationship between Japan and South Korea over wartime history and other disputes.

Ahead of the trilateral session, Motegi and Blinken also held bilateral talks and agreed to deepen the alliance further toward the goal of a free and open Indo-Pacific region through working with allies and like-minded countries.

Motegi and Blinken also reaffirmed close bilateral coordination to resolve the past abduction of Japanese citizens by North Korea, while discussing regional issues such as China and Afghanistan, the Japanese minister said.