It was the nightmare of my life: military journalist's memories of Khojaly massacre 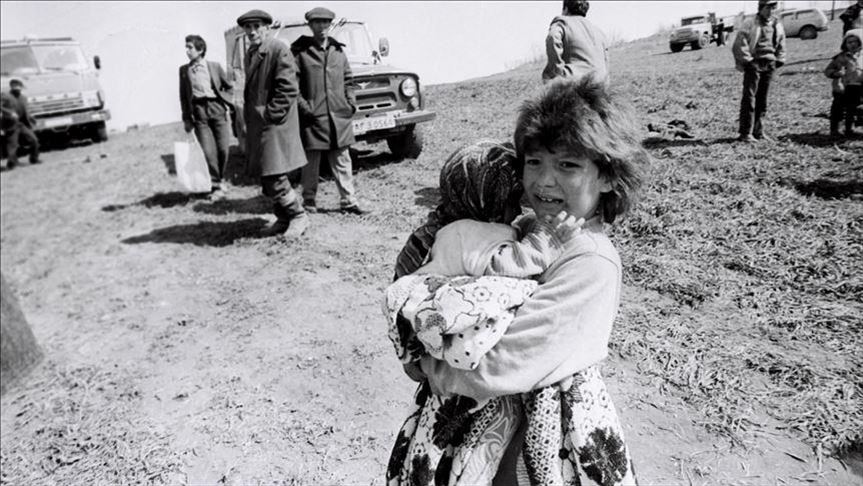 Lithuanian military journalist Ricardas Lapaitis who witnessed the Khojaly massacre has shared his memories with News.Az

"I came to Aghdam when I was 23 years old. When I left, after those terrible events, I felt like I had lived a lifetime. I had never seen so many brutally murdered, mutilated people with their ears cut off, their fingers cut off, their scalps removed. Drenched in gasoline, they were tied to APCs with barbed wire, dragged to Azerbaijani checkpoints, and for these corpses, the executioners asked for grain and gasoline. The Azerbaijanis gave all they asked for because the most important thing for them was to bury the bodies in the ground. And how many of them still do not have a grave, whose ashes are scattered by the wind," he recalled.

"It was the nightmare of my life. Seeing young mutilated children was hell in Aghdam. Children, women, old people came barefoot, frostbitten, with broken faces, wounded. They said they envied the dead," Lapaitis said.

"Everywhere you went - the mosque, the hospital, the sanitary train - every room was full of corpses. Some were finished off, others were scalped alive."

According to the journalist, this is the kind of Armenian fascism that could mature in our days.

"Azerbaijan was in an information blockade in those days. And it was a paradise for the executioners. Because the world was silent. Because only lone journalists could tell the world what happened there. The worst thing is when you look into the eyes of a child and don't know what to tell him, why his relatives were killed in front of his eyes. Why they were shot. We couldn't explain to the child what his fault was. Because that child saw more than you did. Because this child came back from the concentration camps of Askeran and Khankendi, where his mother was raped before his eyes. Where sacrifices were made on Armenian graves and his family's heads were cut off. Where they were starved and cold. Where they were dragged out in the cold and mocked. These executioners had no shame, no conscience. For these executioners, they were Turks who had to be killed. They had a sick psyche."

Lapaitis said he always ask God for strength to tell people the truth.

"I want people to go back to Khojaly, to get everything back. Because when the blood of the dead was still on the streets, the Armenian terrorists were already writing their names on the fences. There were children lying in puddles of blood in the streets, and these subhumans were already writing their names on the walls. Before entering, they threw a grenade into the houses. They didn't care that families were hiding in these houses. Then the wounded were taken to concentration camps. These are the facts. This is the least that we can say about this tragedy," Lapaitis went on saying.

Military journalist urged that every house, every yard be returned to the Khojaly inhabitants.

"I urge that a monument to the victims of the Genocide be erected in Khojaly!"

Lapaitis believes that justice will triumph.

"The Azerbaijanis who were expelled from Armenia and the Meskhetian Turks also found shelter in Khojaly. And when they got to this terrible hell, in Askeran they saw prisoners brought from Garadaghli, exhausted, beaten," he said.

"It's an endless page of Azerbaijan's pain. That is why I call for justice."

"I ask you to do everything to keep this memory. As in the eyes of a little girl in the arms of her mother. To keep the candle of faith burning. We are all eternally indebted to all those who were killed in Khojaly," Lapaitis concluded.